This week's buzz is all about Possessed by Peter Laws, which has just been published by Allison & Busby. If you want to know more about Possessed, follow the #Possessed hashtag and visit @sjroth21 on Twitter (https://stephsbookblog.com) tomorrow. 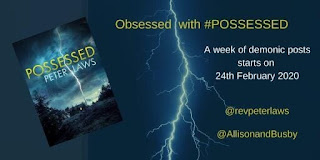 Rather than read Possessed straightaway, I decided to visit this series where it all began - with Purged, the first Matt Hunter book. 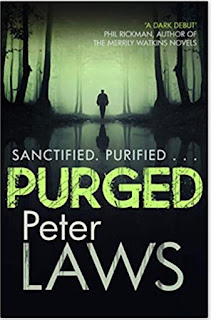 Matt Hunter lost his faith a long time ago. Formerly a minister, now a professor of sociology, he's writing a book that debunks the Christian faith while assisting the police with religiously motivated crimes. On holiday with his family in Oxfordshire, Matt finds himself on edge in a seemingly idyllic village where wooden crosses hang at every turn. The stay becomes more sinister still when a local girl goes missing, followed by further disappearances. Caught up in an investigation that brings memories to the surface that he would prefer stay buried deep, Matt is on the trail of a killer determined to save us all.

My verdict
I love creepy crime fiction, and Purged certainly didn't disappoint. The book begins with a disturbing scene and a great introduction to Matt Hunter, a former minister who is now an academic and assists the police with crimes motivated by religion.

Purged combines horror and murder mystery in a small-community setting, a village teeming with religion. Two women have disappeared, followed by a third, and the local church is at the centre of the investigations.

The book is well written with a well-developed plot. The author uses his own experience as a church minister to explore what happens when religion is taken to extremes. But rather than take everything too seriously, there's an enjoyable mix of humour and darkness. While there's more crime than horror in Purged, it certainly has a creepy vibe to it, with some very visual - and often disturbing - imagery. Matt is not only likeable but also believable, a family man with tragic events in his own past. And he certainly makes a change from the flawed police detective found in many other crime novels.

Purged is a great first novel and I found myself racing through it to the end. I enjoyed it so much that I've already bought the next book in the series!

Read the series
There are now four books: Purged, Unleashed, Severed and Possessed. Here is more information on the other three.

Fifteen years ago, 29 Barley Street in Menham, south London became notorious as the scene of alleged poltergeist activity and then as a crime scene with the death of young Holly Wasson. The shadow cast by this episode is still felt in the town, and among the gang of friends who were caught up in the tragic events. That shadow looms larger than ever when one of the group dies in horrific and strange circumstances.
Matt Hunter, former church minister and now university professor, is called in to advise the police on the possible ritualistic elements of the death. And he is forced to ask himself, are forces beyond the grave at work or is a flesh-and-blood killer at large?

During a Communion service, the teenage son of the vicar brutally attacks his father with an axe in full view of the congregation. A frantic police search for the boy follows as rumours circulate that he was involved in devil worship. Atheist ex-minister Professor Matt Hunter is brought in to advise, yet he soon suspects the cause is far more complex than first thought.
Elsewhere, a ten-year-old boy, Ever, grows up in a small cult who believe they are the only true humans left and that the world is filled with demons. Harnessing the powers of a bizarre ritual they hope to bring peace and paradise to the world.
Soon the worlds of Matt and Ever will collide in one terrifying and murderous night...

When an unidentified and blood-soaked man is discovered with the name Baal-Berith scored into his flesh, Professor Matt Hunter is called in by the bewildered local police. As an atheist ex-minister and expert on religion, Matt can shed light on the ancient Canaanite demon known as the spirit of blasphemy and murder, but as he's drawn into a frenzied murder investigation, a fury of media interest and a TV show documenting a mass exorcism, the situation follows a much murkier path. Striving to provide balance to the show's increasingly sensational tone and rational support for the vulnerable 'clients', Matt cannot leave, even as events get seriously out of hand...

Posted by Victoria Goldman at 08:26 No comments:

BEST OF CRIME with Gytha Lodge 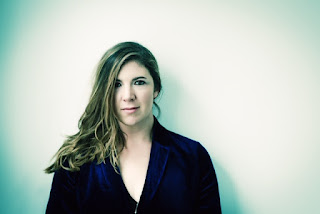 I'm choosing two current authors with multiple books because this is so hard any other way! I’ve loved Tana French for her gorgeous, atmospheric writing and dark themes. And Ruth Ware for her wonderful, timeless mysteries which sweep me away.

The adaptation of Gone Girl was superb. Deliciously dark and tense. I also think Drive counts as a crime movie and it’s shocking, powerful and incredibly atmospheric. Loved it, in a flinching-at-the-violence kind of way.

The Killing. I am only mid-way through it (I know – it disappeared off the channel I was watching it on and it’s taken me years to pick it back up) but blimey is it good TV. Skillfully interwoven and utterly addictive.

Tom Ripley. He brings such depth to the classic psychopath and it’s possible to empathise with him as he treads towards the terrible end-points of his machinations.

Rebus for me. He’s such a rounded, real, messed-up character. And he isn’t a short-hand, either. There’s no replacing character with a tragic back-story. He lives and breathes (and swears).

I’m an emotions kind-of girl, so I’m going to go with one of the saddest and most futile deaths in crime: Jay Gatsby in The Great Gatsby. Love, riches and a perfect lifestyle proved to be false. And in the end, only the library books were real.

Judiciary.uk is a wonderful resource for all the legal wranglings, and I also loved Clare Mackintosh’s excellent Twitter feed on what annoys her in crime novels.

It’s going to be tough, and there are going to be failures. So just do not. Stop. Writing.

... WRITING SNACKS
Yoghurt covered brazil nuts. Or pretty much anything coated in yoghurt.  I often consider asking my editor to cover any notes on my books in yoghurt as I’d immediately bond with them better.

About GYTHA LODGE
Gytha Lodge is the Sunday Times Bestselling author of She Lies in Wait, a Richard and Judy Book Club and Sunday Times Crime Club pick. She has lived in Cambridge for more years than she cares to remember, and prior to becoming an author was an award-winning playwright. She has also spent some years as a copywriter, with a little marketing thrown in. She writes YA and children’s novels on Wattpad, where she has accrued over 7 million reads, and coaches rowing for the City of Cambridge. She is profoundly addicted to tea, crosswords, and awful puns.

About WATCHING FROM THE DARK 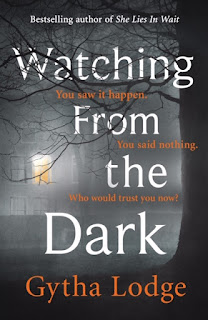 Publisher's description
Aidan Poole logs onto his laptop late at night to Skype his girlfriend, Zoe. But to his horror, he realises she is not alone.
Completely helpless, all he can do is listen to the sounds of a violent struggle.
And then a chilling silence.
He's desperate to find out if she is OK. But then why is he so hesitant to call the police?
When his messages finally reach them, DCI Jonah Sheens and his team take the case.
And discover the body. . .

Watching from the Dark was published by Michael Joseph on 6 February 2020.

Posted by Victoria Goldman at 07:28 No comments: