Murder in Malmö by Torquil Macleod 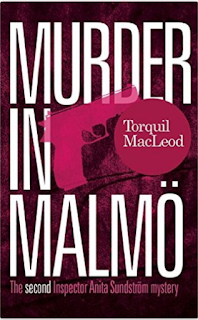 Publisher's description
A gunman is loose in Malmö and he's targeting immigrants. The charismatic head of an advertising agency is found dead in his shower. Inspector Anita Sundström wants to be involved in the murder investigations, but she is being sidelined by her antagonistic boss. She is assigned to find a stolen painting by a once-fashionable artist, as well as being lumbered with a new trainee assistant. She also has to do to restore her professional reputation after a deadly mix-up in a previous high-profile case. Then another prominent Malmö businessman is found murdered and Sundström finds herself back in the action and facing new dangers in the second Anita Sundström Malmö mystery.

My verdict
Murder in Malmö is the second book in the Malmö series and is even better than the first.

In this gripping book, Inspector Anita Sundström is searching for stolen paintings, all painted by a once-fashionable artist who is back with a new exhibition. Thanks to her previous actions, Anita has been sidelined by her boss. Instead, it's her colleagues who get to investigate a series of high-profile murders. At the same time, a gunman is targeting immigrants in Malmö.

I really enjoyed this book. Anita is a tough female protagonist, determined to hold her own in a male-dominated workplace, with a feisty independent streak. A variety of strong characters push the story along, while the historical/political background was an interesting read.

This is a complex storyline, with three interlinked crimes, and has been plotted exceptionally well. Although the book can be read as a standalone, I think it would make more sense to read the first book (Meet Me at Malmö) beforehand, to understand Anita's background and the dynamics between the police team.

I received an Advance Reader Copy from the publisher in exchange for an honest review.
Posted by Victoria Goldman at 00:18