My Writing Process by Claire Fuller

I would like to welcome Claire Fuller to my blog today, to talk about her writing process. Claire's book Our Endless Numbered Days was published in paperback by Penguin on 31 December 2015. 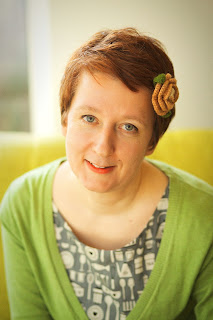 My Writing Process
By Claire Fuller

I’m just beginning to write my third novel, and it’s taken until now to work out if my writing process is different for each book, or what similarities there are.

What I’m only just realising is how important it is for me to have an idea of place before I start. Where do my characters live – country, area, type of house, room – I need to be able to see the space they inhabit before I can really get to grips with the story.

And it seems after two and a bit novels, I’m a big follower of the process that E.L. Doctorow talked about in his famous quote: “Writing is like driving at night in the fog. You can only see as far as your headlights, but you can make the whole trip that way.”

I’m not a planner. I have a vague shifting idea of an end point; perhaps who will live and who will die, but no idea how that life or death will happen. I start with one or two characters, drop them into a location, and see what they do. If it’s going well, by about a quarter or a third of the way through the characters take over and will sometimes refuse to do things. This isn’t anything spooky, it’s just that I know in detail the type of people they are, their habits, their likes and dislikes, and this in depth knowledge begins to help the story along. In my second novel, Swimming Lessons, I had two characters who I wanted to get together quickly, but they took chapters and chapters to do it. I’d put them in a room together and they would barely look each other in the eye. In the end I had to let them do it in their own time.

I don’t like writing. Perhaps it would be easier if I were a planner, but because sometimes I really don’t know what is going to happen next, it can be difficult. I treat it like a job; it is how I make my living, so I sit down at my desk at 9am and stop at 6pm. I do lots of other things during those hours, of course – I’m easily distracted – but that is my working day. What I do like however, is editing. Oh, to write The End on a first draft! Once I have 70,000 words or whatever, then I can have fun – cutting, moving sections, working on the structure – and then playing with the words, making sure each one is right, that sentences flow, that it all has a rhythm when I read it aloud.

However, I do edit a bit as I go along. It’s impossible for me to write without going back a short way each day and reworking. My new words are so abysmal that if I didn’t go back and edit a little bit then the writer’s doubt that we all suffer from would be too inhibiting. But I set myself some rules: Whenever I sit down to write I must also add new words to my manuscript. I’m never allowed to just edit until I’ve finished. Even if I only have ten minutes writing time, just three or so of those can be spent editing. If I have a full day available then I aim for 1,000 words (but I’m secretly happy if I get 800 down). At the end of each day I keep a tally of what my new word count is and a line of two of what I did and how it went. Very often I write something like, ‘I can’t do this, why am I doing this?’. And to keep the internal critic at bay while I’m writing I allow it a few words of its own now and again. So, in the middle of a paragraph I might write in square brackets [this is rubbish], and then carry on writing. It’s also reassuring to know that if I’m run over by a bus before the manuscript is finished no one will think that I believed it was any good.

Claire Fuller was born in Oxfordshire, England, in 1967. She gained a degree in sculpture from Winchester School of Art, but went on to have a long career in marketing and didn't start writing until she was forty. She has an MA in Creative and Critical Writing from the University of Winchester and lives in Hampshire with her husband and two children. Our Endless Numbered Days is her first novel, and was awarded the Desmond Elliott Prize for debut fiction in 2015. 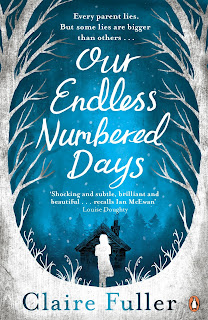 A taster of my review: Our Endless Numbered Days is a beautifully-written tale, filled with mesmerising descriptions and haunting prose... This is a novel that will stay in my memory for a long time.

Read my full review here.
Posted by Victoria Goldman at 08:10