I would like to welcome Christine Webber to my blog today. Christine's book Who'd Have Thought It was published on 19 June 2016. Christine is a journalist too, so for something a bit different she's interviewed herself! 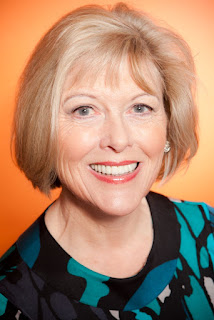 An interview with myself
By Christine Webber

Hello, everyone. I’m delighted that Victoria has given me the chance to ‘chat’ to you in this way. As I’m a journalist by trade, I thought it might be interesting to ask myself the sort of questions I might pose if I were interviewing another author. So, here we go!

This is your first novel for 29 years. What happened to the first one? Was it such a flop that you crawled away vowing never to repeat the experience?
In Honour Bound was published when I was a news presenter for Anglia TV.  It actually did quite well – but mostly in the nine counties of the Anglia region!
What happened to prevent Novel Number 2 was complicated. Mostly, it was down to me leaving daily television news for print journalism, where I became an agony aunt for various newspapers and magazines including (at different times) The Scotsman, Best, TV Times and BBC Parenting. Gaining a reputation as an agony aunt led to me being booked as a sex/relationships ‘expert’ on various TV programmes - including BBC Breakfast and Good Sex Guide… Late .  Next, I decided to gain more credibility by training as a psychotherapist. That led to me starting a small therapy practice. Soon, publishers began asking me to write self-help books. 12 of those later, I finally found the time to return to fiction.

Many writers talk about having a burning desire to write. It doesn’t sound as if that is the case with you. Surely if you had, you would have got on with this sooner?
Good point! I’m interested in lots of things, I suppose. I did keep scribbling away at novels, though. But somehow they never saw the light of day.

Were they awful?
Probably. I think one thing I’ve come to understand is that to write good fiction you need to read novels. I had read voraciously as a child, but my grown up life seemed to be all about keeping up with therapy journals and all the newspapers – so that I was well-informed enough to do my day job.  That has changed. I now read masses of fiction. Favourite authors include Helen Dunmore, Ian McEwan, Iris Murdoch, Colm Toibin, Patirick Gale, Kate Atkinson and John le Carré.  Also, last year saw a debut novel by Clare Mackintosh called I Let You Go. It was my favourite book of 2015 and I can’t wait to read her new one which is out shortly. I also read books by fellow indie authors and am currently loving An Unknown Woman by Jane Davis.
So, you read more fiction these days, but were there other reasons for writing a novel now?
In a nutshell, I became increasingly aware that life doesn’t go on forever! Also, I got a great idea, which arose in a slightly strange way. I was invited on to BBC Breakfast to discuss a new trend - which had been given the acronym SWOFTY by the Department for Work and Pensions. SWOFTY stood for Single Women Over Fifty. I couldn’t help feeling there was a novel waiting to be written here!  Also, at that time, Piatkus had just published my baby boomers’ guide, Too Young to Get Old. And all the research I had done for that fed into the novel too.

What’s the novel about then?
It’s about a woman GP, aged 55, who finds herself unexpectedly single after almost 30 years of marriage. But the story starts a year after the event when she discovers what a SWOFTY is and that she is one! And she starts embracing single life with enthusiasm. However, she quickly discovers that being single in mid-life is totally different from being single when you’re young – because you’re dealing with your adult children’s problems, your ageing parents, your job, your friends having their own ups and downs and so on. Most mid-life people I know say that they are amazed at how turbulent their lives are – just at a time when they thought they would be calming down. So that is reflected in the story. There are very serious issues in it. But it’s also funny – and lots of people have told me they have laughed out loud as they have read it, which is gratifying.

Did you publish it independently because you couldn’t find a publisher?
There was an element of that. All my contacts in publishing were on the non-fiction side, and there was little reason for them to be interested in whether or not I could write a decent novel. Also, various friends who had always been published in the past were changing to Indie publishing. So they were an inspiration. And I came to the conclusion that I didn’t want to waste time pursuing various publishers, and that I just needed to get the book out. I have loved the process – especially finding the right editor/proof reader (Helen Baggott) and the perfect jacket designer (Jane Dixon-Smith). Forming your own creative team is fun! Also, I have fallen on my feet with my printers, Clays, who produce really beautiful books.

Are you going to continue writing novels – and publishing them independently?
That’s the plan.

About Christine Webber
Christine Webber is a writer, broadcaster and psychotherapist. She has just brought out a novel – Who’d Have Thought It? After almost three decades as an author, this particular book signals a change of direction. For a start, it is her first work of fiction for 29 years! And, after decades of being published conventionally, she has gone the Indie route.

A year after discovering that her husband no longer loves her, Dr Annie Templeton wakes up with a sudden relish for singledom. However, she soon realises that being single in your fifties is very different from being single in your twenties.
How, she wonders, do people of my age – with careers, adult children doing unwise things with unwise people, parents going gaga, and friends falling ill, or in or out of love – ever have the time and energy to find a new partner?


Who’d Have Thought It? is a romantic comedy, which will make you laugh and cry – often at the same time.

Buy Who'd Have Thought It? from Amazon here 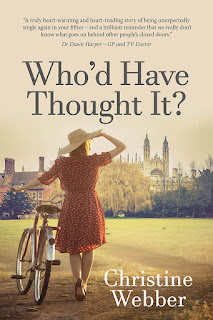