Today, I'm delighted and excited to be hosting the cover reveal for Six Stories by Matt Wesolowski, which is being published by Orenda Books on 15 March 2017.

This is a STUNNING COVER, as are ALL Orenda book covers!

It's sophisticated, eye-catching and intriguing - certainly a book that you'll notice on the shelf and want to pick up IMMEDIATELY. I love the colour contrast! Beautiful!

I'm waiting for Orenda to publish a coffee table book of jacket covers - you never know! 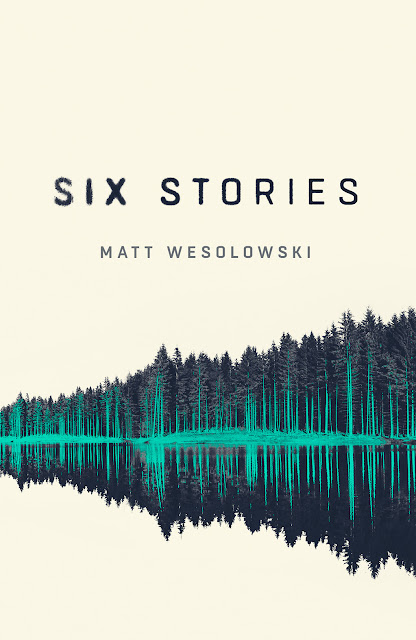 Can't wait to read this one too, as it sounds fantastic!


Six Stories: The blurb
A stunning Serial-style thriller based around six conflicting podcasts and an elusive narrator – perfect for the armchair detective.

1997. Scarclaw Fell. The body of teenager Tom Jeffries is found at an outward bound centre. Verdict? Misadventure. But not everyone is convinced. And the truth of what happened in the beautiful but eerie fell is locked in the memories of the tight-knit group of friends who took that fateful trip, and the flimsy testimony of those living nearby.

2017. Enter elusive investigative journalist Scott King, whose podcast examinations of complicated cases have rivalled the success of Serial, with his concealed identity making him a cult internet figure.

In a series of six interviews, King attempts to work out how the dynamics of a group of idle teenagers conspired with the sinister legends surrounding the fell to result in Jeffries’ mysterious death. And who’s to blame...  As every interview unveils a new revelation, you’ll be forced to work out for yourself how Tom Jeffries died, and who is telling the truth.

A chilling, unpredictable and startling thriller, Six Stories is also a classic murder mystery with a modern twist, and a devastating ending.

Matt Wesolowski: About the author
Matt Wesolowski is an author from Newcastle-Upon-Tyne in the UK. He is an English tutor and leads Cuckoo Young Writers creative writing workshops for young people in association with New Writing North. Matt started his writing career in horror and his short horror fiction has been published in Ethereal Tales magazine, Midnight Movie Creature Feature anthology, 22 More Quick Shivers anthology and many more. His debut novella The Black Land, a horror set on the Northumberland coast, was published in 2013 and a new novella set in the forests of Sweden will be available shortly. Matt was a winner of the Pitch Perfect competition at Bloody Scotland Crime Writing Festival in 2015. He is currently working on his second crime novel Ashes, which involves black metal and Icelandic sorcery.