I am delighted to welcome Paul Finch to my blog today, for his Strangers Blog Tour. Paul has some top tips on writing action sequences, followed by my review of his latest book. Strangers was published by Avon on 22 September 2016. 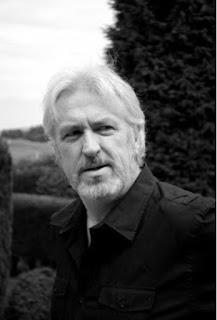 
I’m honoured that my crime novels have won praise from reviewers for their action sequences. Flattering terms like ‘vivid’, ‘gut-thumping’ and ‘bone-crunching’ have all been used in recent times, so I can only assume that I’m doing something reasonably right.

It may surprise people to hear this, but one of the tricks to writing good action is to be subtle.

For real?, I hear you ask. ‘Gut-thumping’? ‘Bone-crunching’? What’s subtle about that?

What I mean is that action is most effective when used sparingly. Otherwise you risk your novel turning into a cartoon. Now, that may be what some authors are looking to achieve. But personally, I like to keep things just this side of believable. So I don’t include a fist fight or a car chase on every other page. Likewise, I try to do those other things that are important in novel-writing: evoke some mood, some atmosphere, develop plot and character, examine relationships, etc. And that’s not some attempt to be literary, it’s an attempt to create a more rounded and satisfying experience for the readers, and to prevent them becoming bored, because you can just as easily get bored with too much action as you can with too much kissing, too much chatter, etc.

Another problem with overusing action is that you consistently have to raise the stakes, always needing to produce a bigger, louder sequence than the one before. You won’t need me to tell you that it isn’t long before this gets preposterous. You could finish up with the situation you had in the Bond movie, DIE ANOTHER DAY, which included an invisible car, a giant beam of concentrated solar energy fired from a satellite and destroying Earth’s armies, and Bond wind-surfing a tidal wave.
Even trying to keep things grounded sometimes isn’t enough.

You only need to look back at some of the 1980s action extravaganzas, the Schwarzenegger and Stallone movie, which were often blizzards of gunfire from beginning to end, with soaring body-counts and heroes who were completely invincible. And that’s another thing. Unless you’re setting out to write about superheroes, remember that the more vulnerable your lead character is going to be, the more effective he/she is. To have weaknesses is human – it’s a recognisable and even likeable trait in fiction. So if you portray them walking through storms of bullets without getting hurt, or despatching every opponent with ridiculous ease … why would anything else your reader sees them encounter be deemed a threat? How will he/she empathise with them? All tension and suspense is lost.

These are the most important tips I can offer with regard to action sequences. Don’t overuse them and don’t overcook them. Less is always more, and remember that in the real world violence has consequences. Even if your heroes emerge from the battle unscathed, they are not going to be unshaken. There may also be legal ramifications, especially if your hero is a cop. Okay, it’s a built-in given with police thriller fiction that the central character tends to be on the side of right and therefore, almost whatever he/she does will end up being approved. But I once read a very interesting quote from a senior San Francisco police officer, who, after it was draw to his attention that in the five Dirty Harry movies, Callahan’s kill-count was somewhere in the 40s or 50s, commented that no serving officer with such a record could expect to keep his job or even his liberty.

Obviously, we’re often dealing with ‘do or die’ situations in our novels, but the legal structure of the free world is important, so we at least have to pay a degree of lip-service towards that.
All that said, if you use them judiciously, your action sequences can still be among the highlights of your book. For this reason, I myself find them the most demanding scenes to write, because they need to be bang-on.

One case in point was a car-chase across South London in my fifth Heckenburg novel, HUNTED. It was described by one reviewer as ‘the mother of all car-chases’, which made me happy, because though it only occupied two pages of the novel, it had taken me two whole weeks to construct it. First of all, I’d wanted to get it correct geographically. This involved plotting it on a map and taking advice from London traffic officers. I also drove the route to see if such a chase was technically possible. And while the actual writing might have been done in a day, it then needed to be very tightly edited. It isn’t a rule of law, but I always find it gives you a quicker read if you use shorter, punchier sentences. So whatever you do, don’t meander – get to the point of each sentence immediately. This will energise the entire passage.

Also, remember that the quality of an action sequence is not just a piece of narrative. It works much better when it’s an assault on the senses. Any kind of pursuit or combat situation can be overwhelming for those involved. You’ve got to think how it looks to be in the midst of this terrible danger, how it sounds, how it smells: a chaos of flickering ‘jumping jack’ images, the mingled stenches of sweat, blood, oil, the crump of splintering metal, the explosion of shattering glass, the deafening bangs as speeding cars rebound from one another, etc.

All of this can make it a vivid experience for your audience, who I try to involve as much as I possibly can. If you can make your reader feel that he/she is the one being put through the mangle, not your hero, then that is one sure way to make them flip through those pages in a blur of speed.

Paul Finch is a screenwriter, novelist, short story writer and journalist, whose published and broadcast work covers a wide spectrum of genres, including horror, fantasy, science fiction, thrillers and crime. 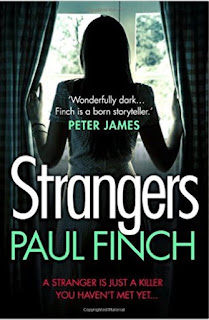 Publisher's description
Unknown, alone, and fearing for your life.
As PC Lucy Clayburn is about to find out, going undercover is the most dangerous work there is.
But, on the trail of a prolific female serial killer, there's no other option – and these murders are as brutal as they come.
Lucy must step into the line of fire – a stranger in a criminal underworld that butchers anyone who crosses the line.
And, unknown to Lucy, she's already treading it…

My verdict
Strangers is original, fast-paced and terrifying at times, as PC Lucy Clayburn goes undercover to investigate a series of brutal murders. Unusually, the book features a female serial killer - not often found in crime fiction.

I have enjoyed Paul Finch's Heck series so far (although I still have another book to read) and found Strangers to be equally as enjoyable and compelling, with a new female police officer in the primary role, rather than a detective. The book is dark and brutal at times, delving into the criminal underworld and prostitution. It's also highly descriptive, mixing police investigation with page-turning action and entertaining storytelling.

I really liked PC Lucy Clayburn's character - and she certainly felt very real by the end of the book. I'm hoping she will feature in more Paul Finch books in the future.

I received an Advance Reader Copy in exchange for an honest review. 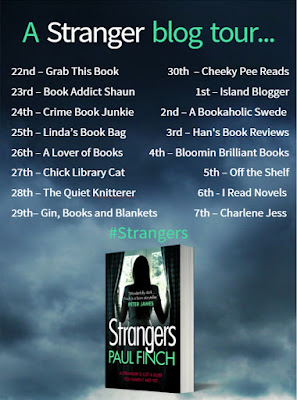 Posted by Victoria Goldman at 08:19