I'm delighted to be today's stop on the Saving Sophie blog tour today. Saving Sophie by Sam Carrington was published in paperback by Avon on 15 December 2016. 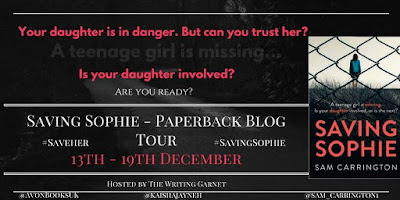 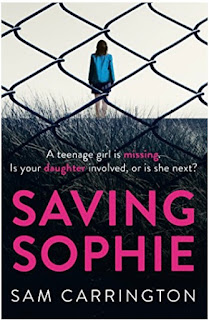 A teenage girl is missing. Is your daughter involved, or is she next?
Your daughter is in danger. But can you trust her?
When Karen Finch’s seventeen-year-old daughter Sophie arrives home after a night out, drunk and accompanied by police officers, no one is smiling the morning after. But Sophie remembers nothing about how she got into such a state.
Twelve hours later, Sophie’s friend Amy has still not returned home. Then the body of a young woman is found.
Karen is sure that Sophie knows more than she is letting on. But Karen has her own demons to fight. She struggles to go beyond her own door without a panic attack.


As she becomes convinced that Sophie is not only involved but also in danger, Karen must confront her own anxieties to stop whoever killed one young girl moving on to another – Sophie.

My verdict
Saving Sophie is an easy read with dramatic scenes and a gripping plot.

Karen Finch wonders if something sinister happened on her daughter Sophie's night out, after the police brought Sophie home, drunk and confused. When Sophie's friend Amy doesn't return home, Karen becomes convinced that Sophie is also in danger, especially as her daughter's friends seem very vague about that night. But to unravel the lies, Karen needs to overcome her crippling agoraphobia. How far is she prepared to go to save her daughter?

The book is cleverly constructed, with twists and turns that keep on coming. It explores various relationships - between parents and children, teenagers and their peers and husbands and wives - and is essentially a book about fear. How our fears play on our mind, leading us to question everything, and control how we act and behave towards ourselves and others. And whether we can overcome our fears to save the ones we love.

I can't say I particularly liked any of the characters, including Karen herself, and I did wonder why the police weren't more involved. But the short intense chapters led me to read 'just a bit more' and before I knew it, I was halfway through the book - and then at the end. For me, this was a one-sitting compelling read. And I look forward to reading Sam Carrington's next book!

I received an Advance Reader Copy. 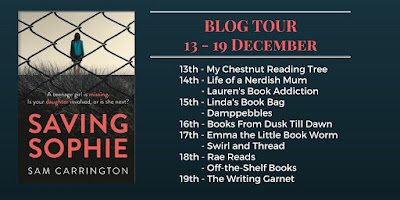 Posted by Victoria Goldman at 11:52