I am delighted to be today's stop on the blog tour for The Bone Field by Simon Kernick. The Bone Field is being published by Century on 12 January 2017. Here's my review... 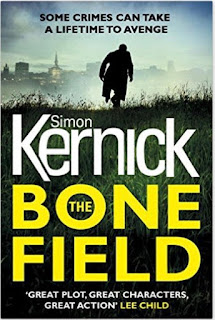 DI Ray Mason and PI Tina Boyd begin a desperate hunt for the truth that will take them into a dark and terrifying world of corruption and deadly secrets, where murder is commonplace, and nothing and nobody is safe ...

When the bones of a 21-year old woman who went missing without trace in Thailand in 1990, are discovered in the grounds of an old Catholic school in Buckinghamshire, an enduring mystery takes on a whole new twist. Her boyfriend at the time, and the man who reported her missing, Henry Forbes, now a middle-aged university lecturer, comes forward with his lawyer and tells DI Ray Mason of the Met’s Homicide Command that he knows what happened to Kitty, and who killed her.


My verdict
The Bone Field is the first in a new series from Simon Kernick. I hadn't read one of his books for a while, so jumped at the chance to read this. It didn't take long for me to realise what I've been missing.

The Bone Field crosses genres - it's a combination of police procedural and action thriller. It delivers great writing, believable characters and an intriguing plot covering some dark themes. There was barely a moment to breathe, with several twists, turns and red herrings trying to lead me astray while I attempted to unravel the mystery of what happened to Kitty.

As with all new series, The Bone Field is also about getting to know new characters. I love the pairing of DI Ray Mason and PI Tina Boyd (from some previous books) - what a great combination of personalities and backgrounds!

The ending is left slightly hanging, ready for a sequel, with various questions remaining unanswered. The only thing that bothers me about that is the long wait until the next book in The Bone Field series! I'll certainly be waiting to grab it when it's published...

I received an Advanced Reader Copy. 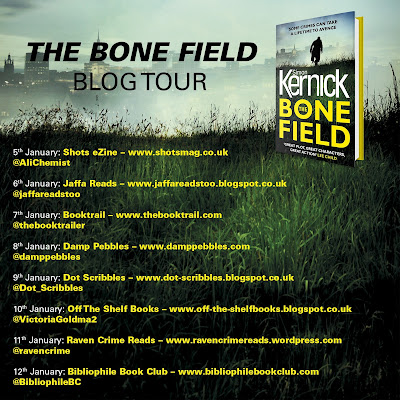