I'm delighted to welcome Kjell Ola Dahl to my blog today for his The Ice Swimmer blog tour, to talk about 'music and writing'. The Ice Swimmer is being published in paperback by Orenda Books on 30 April 2018. 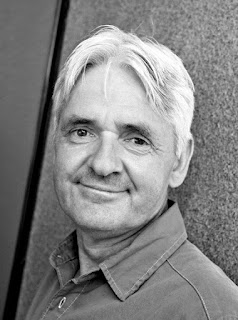 For me, music and writing are intrinsically linked.

I always think an interesting question to ask about one of the characters you’ve created as a writer is whether their taste in music tells you something about them. We all have prejudices about taste. You might hate some specific piece of music; you meet a person who says she loves it, and you think she’s a moron (or you do if you’re like me). Afterwards, though, you and the same person might have an interesting discussion about the latest book you’ve both read. Now she’s suddenly an interesting person – someone whose intelligence and taste you respect. Music and writing therefore goes many ways – making you despise and adore the same person.

Gunnarstranda, a police officer in my Oslo Detectives series, has an obsession with Miles Davis. I don’t have the same strong affinity as he does to Miles’s music, though. I can relax to records like Kind of Blue, In a Silent Way or Milestones, but I can never bear to listen to the whole of Bitches Brew, for example. Gunnarstranda can though, and I think this obsession reveals an aspect of his personality. He likes to follow the trumpet’s lead through the strange world of beats it’s played against. I think he is intrigued by complex things and has an innate patience, and this is reflected both in his taste in music and the way he conduct his police work.

Musical taste also tell us something about the protagonist of The Ice Swimmer, Lena. She likes Tom Waits and female singers such as Sade. These are two very differnet types of artists – one of them rough and experimental and the other smooth and easy to listen to. I think Lena is the type of person who uses music to reflect different feelings and states of mind.

One reader wrote this to me about The Ice Swimmer: ‘I loved the book, but didn’t like Lena's taste in music and films.’

I like this comment very much because it shows that the reader has been with my character all the way, but still, after they’ve finished the book, they have a sort of unbalanced feeling about the protagonist. Lena is therefore still in their mind.

Music provokes all our emotions: it influences your heartbeat and your blood pressure. Your pulse and hearbeat will sometimes adapt to the beat of the music you’re listening to. No wonder music can be inspirational.

I am often inspired by music when I write; after all, writing is all about emotions. If I am listening to music I like very much, my thoughts starts wandering and suddenly an extrodinarily good idea pops into my mind and I have to start writing immediately. A few moments later I don’t hear the music anymore and I’m just concentrating on the writing. At other times I have to turn the same music off, so that I can concentrate. That is a bad sign. When I turn the music off, I know that the idea was not as good as I thought it was in the first place – and I know I will throw the text away later.

Other times the opposite happens: I hear some good music; I’m inspired, start writing and suddenly the music makes the ideas accelerate. I cannot write fast enough. It’s like a sprint. I’m exhausted, but I cannot stop, because if I do, that magic grip will let go and then I will lose everything. But later, when I polish the same text, I can do it perfectly without listening to anything. I can concentrate hard on the words and sentences and they survive the trash bin.

Writing is hard work – with or without music. But for me music feeds my creativity.

About The Ice Swimmer 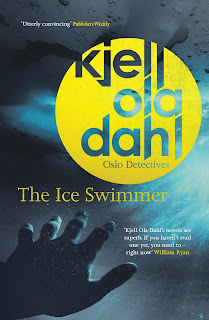 Publisher's description
When a dead man is lifted from the freezing waters of Oslo Harbour just before Christmas, Detective Lena Stigersand’s stressful life suddenly becomes even more complicated. Not only is she dealing with a cancer scare, a stalker and an untrustworthy boyfriend, but it seems both a politician and Norway’s security services might be involved in the murder. With her trusted colleagues, Gunnarstranda and Frølich, at her side, Lena digs deep into the case and finds that it not only goes to the heart of the Norwegian establishment, but it might be rather to close to her personal life for comfort. 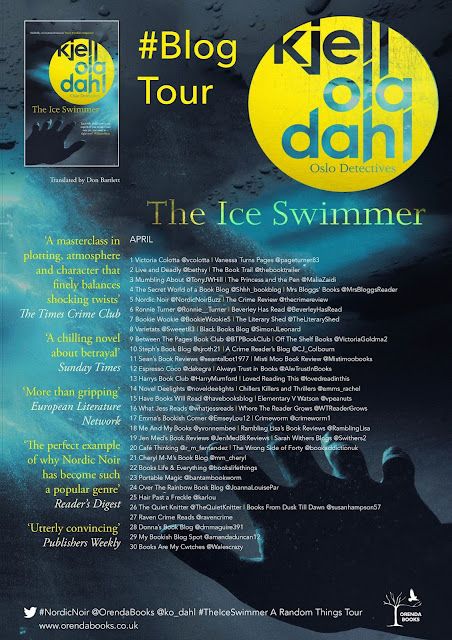 Posted by Victoria Goldman at 08:08