finalist in the Ngaio Marsh Awards 2018

The Silence of the Lambs. In all ways brilliant. I didn’t sleep well after that. I also struggled to eat chicken livers for a while. I love atmospheric so I’m going to mention Se7en. And of course I’m a sucker for twists and unreliable narrators so... The Usual Suspects is going to sneak in here as well.

No contest - True Detective, the first season. I was hooked at the opening credits. The steamy, rural Louisiana backdrop, the horrific plot, the incredible combination of the two leads... this show helped me write. Setting took on a whole new meaning for me.

Hannibal Lecter. Thomas Harris, I pray at your statue every morning.

Rust Cohle from True Detective... what a character. Nihilistic, offensive ... yet incredibly good at what he does. And despite his hatred for humanity and himself, he can’t step away from his job. The whole show is pretty much about how this character develops over time. If I was murdered ... I’d want this dude on the case.

The chainsaw drop in American Psycho.. clever use of a gardening tool that. More original than that other guy that just cut several people up with one in Texas.

When Leo DiCaprio’s character dies in The Departed... those lift doors open, and that bullet to the head just comes out of nowhere. Totally unexpected, incredibly powerful. As for just plain horrific... I’m just going to say... Saw. And the sequels. I hope those films don’t give anyone any ideas. They’re gross.

I haven’t actually used any yet for writing ... I usually start with a subject I have some knowledge about, or a place... and then I’ll go have a look or speak with people more in the know than me to make sure I’m on the right track. So I guess I enjoy talking to people rather than checking out the internet?

Read. Read constantly. The more you read, the more you find out what you like... and more importantly ... what you don’t like. And listen to that inner voice of yours.. because that’s how other people think too. Find it, then exaggerate it and expand it. Characters are born that way.

Coffee. Pineapple lumps. Pancakes. Fried chicken. You can’t write on an empty stomach, can you? No. No you can’t.

About NATHAN BLACKWELL
Nathan Blackwell was raised in Auckland, New Zealand and had a ten-year career in the New Zealand Police. Seven of those years were spent as a Detective in the Criminal Investigation Branch, where he was exposed to human nature at its strongest and bravest, but also at its most depraved and horrific. He investigated a wide range of cases including drug manufacture, child abuse, corruption, serious violence, rape, and murder. Because some of his work was conducted covertly, Nathan chooses to hide his true identity. THE SOUND OF HER VOICE is his first novel.

About THE SOUND OF HER VOICE 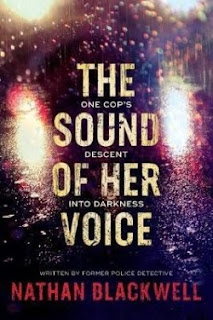 Publisher's description
For Detective Matt Buchanan, the world is a pretty sick place. He has probably been in the job too long, for one thing. And then there’s 14-year-old Samantha Coates, and the other unsolved murder cases. Those innocent girls he just can’t get out of his head. When Buchanan pursues some fresh leads, it soon becomes clear he’s on the trail of something big. As he pieces the horrific crimes together, Buchanan finds the very foundations of everything he once believed in start to crumble. He’s forced across that grey line that separates right and wrong – into places so dark, even he might not make it back.

THE SOUND OF HER VOICE was first published in New Zealand in August 2017 (Mary Egan Publishing). It is a finalist for both Best First Novel and Best Novel in the 2018 Ngaio Marsh Awards. It will be published in the United Kingdom during 2019.

Ngaio Marsh Awards judges comments
“Even by cop-turned-novelist standards, this is gritty, intense and unsparing in its account of the worst humans can do to each other. It’s also shockingly polished as a well-structured thriller and a portrait of a man with right on his side and wrongdoing all around him. There is a lot to be impressed by, most of all the touching honesty of the view Blackwell allows into the mind of his protagonist – cop stories don’t come more authentic (and Kiwi) than this.”

“If this is a debut then goodness gracious me. Raw, emotional, gut-wrenching in places, yet nuanced and well balanced, this is an amazing piece of work, from an under-represented perspective.”