Bob Fracklehurst - the man, the mystery, the meaning... by Louise Beech

Bob Fracklehurst -
the man, the mystery, the meaning...
By Louise Beech 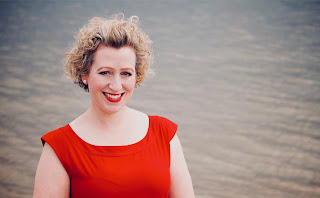 Anyone who has read any of my books will have noticed a certain taxi driver who pops up again and again. Bob Fracklehurst. (Even my spellchecker recognises him!) Technically, he wasn’t in my debut, How to be Brave, but there is an unnamed taxi driver who takes Natalie home from the hospital after she gets the terrible news about her daughter Rose; I like to think that was also no-nonsense, wears-his-heart-on-his-sleeve, Yorkshireman, Bob. He just hadn’t introduced himself to me yet.

In The Mountain in my Shoe, Bob was integral to Bernadette’s ability to volunteer with ten-year-old Conor, who was going through the care system and desperately needed her. Bob regularly took her across town to see the child, imparting frequent words of wisdom, very much there but never overbearing.

In Maria in the Moon, he again is present for a most important journey. He drops Catherine off on the Flood Crisis Christmas night out, and delivers her home again, this time with love interest, Christopher. This comes before a major scene. The words he says to Catherine in the taxi could very well have played a part in the moment – ‘You deserve whatever makes your heart whole.’

In my latest novel, The Lion Tamer Who Lost, our Bob is yet again the one who delivers two characters to one of their most important scenes; this time Ben and Andrew to the hospital. This book explores coincidences (for want of a better word – fate maybe?) and so Bob is witness again to a later reunion.

And in my next novel, Star Girl?, I’ll come to that soon …

Occasionally, I feel like Bob is some kind of a mystical figure. Like I didn’t even write him. He just … is. I don’t even have to force him or try and find somewhere to fit him into the novels. He naturally arrives. In his taxi. Music playing. Advice ready.

Anyone who follows me on social media will see that I’m sisters with a certain Bob Fracklehurst too. She’s actually called Grace. Some years ago, before my books, she came up with this quirky name to use on Facebook instead of her own. As a nurse, she had to be careful at times about what she posted, so it was easier to employ a pseudonym. I loved it. Knew I had to use it. So when the taxi arrived to pick Bernadette up at the beginning of The Mountain in my Shoe, Bob arrived too. 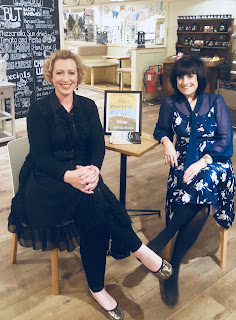 So will he appear next year in Star Girl? Oh yes. And he plays perhaps his biggest role so far. Are you ready for this? He gets out of the taxi. He briefly did in The Lion Tamer Who Lost, but this time it isn’t just his words that influence things. One of his actions plays a key role in changing the destiny of my main character, Stella.

How he came to feature this time was quite profound – totally in keeping with the magical Bob. Last year I was in the car with the other Bob – sister Grace – and discussing with her whether he should return for Star Girl. I was about 30,000 words in and at a key scene. As we chatted back and forth, I glanced at the car in front of us. The registration plate said M900 BOB. Not only did it seem to say I had to conjure him up again, but also the year of the scene I was planning was 1990. 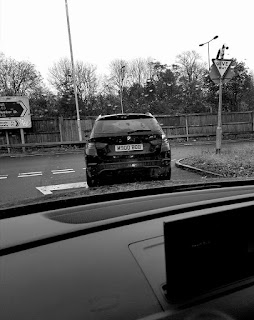 About Louise Beech
Louise has been writing since she could physically hold a pen. She was a columnist for the Hull Daily Mailfor ten years, and her short fiction has won the Glass Woman Prize, the Eric Hoffer Award for Prose, and the Aesthetica Creative Works competition, as well as shortlisting twice for the Bridport Prize. Her debut novel, How to be Brave, was a number one bestseller on Kindle in the UK and Australia, and a GuardianReaders’ Pick in 2015. The Mountain in my Shoe longlisted for the Guardian’sNot The Booker Prize, andMaria in the Moon was a Must Read in Prima, Red and the Sunday Mirror.

About The Lion Tamer Who Lost 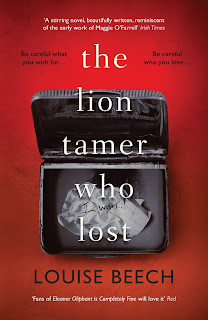 Publisher's description
Be careful what you wish for…
Long ago, Andrew made a childhood wish, and kept it in a silver box. When it finally comes true, he wishes it hadn't…
Long ago, Ben made a promise and he had a dream: to travel to Africa to volunteer at a lion reserve. When he finally makes it, it isn't for the reasons he imagined…
Ben and Andrew keep meeting in unexpected places, and the intense relationship that develops seems to be guided by fate. Or is it?
What if the very thing that draws them together is tainted by past secrets that threaten everything?
A dark, consuming drama that shifts from Zimbabwe to England, and then back into the past, The Lion Tamer Who Lost is also a devastatingly beautiful love story … with a tragic heart.

Here's a snippet of my review: 'I knew this book would be a tearjerker as soon as I immersed myself in Louise Beech's story, with her poetic words leaping off the page like little sparks of light. I had tissues, chocolate and counselling service on standby by the time I reached the end.' 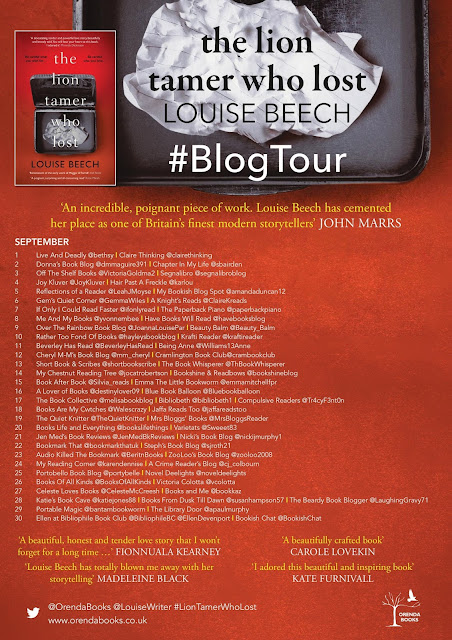 Posted by Victoria Goldman at 07:39