BEST OF CRIME with Emily Koch 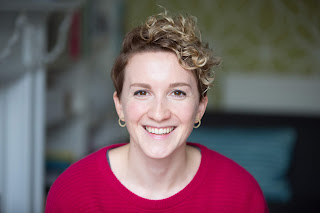 I don’t often read lots of books by the same author, I have to admit – so it’s difficult to pick a favourite. But when I read the literary thriller Little Fires Everywhere by Celeste Ng I immediately went and bought her debut, Everything I Never Told You. I love both, and have re-read them since. They are such fantastic character studies, such subtle mysteries, and such brilliant explorations of family life.

I watched Thelma and Louise for the first time the other week and I loved it so much. What a fantastic pair! I loved the way this story develops, and how it’s not your usual crime story – the way you are following the criminals rather than the detectives and see them before their crime, too. And the ending. Oh my God, that ending! I thought it was perfect.

Breaking Bad spin-off Better Call Saul on Netflix is a firm favourite in our house. The only thing that could knock it off the top of our list would be a series about another character, the delightfully paradoxical softie hitman Mike. Come on, Netflix! More Mike Ehrmantraut!

Tom Ripley. I only read The Talented Mr Ripley by Patricia Highsmith recently but boy, what a novel. What an amazing, amoral, anti-hero. How the hell does she make you like a murderer? I love books that make me think like this – as a writer I love to try and solve the puzzle of exactly how another author has achieved something bold like this. It shouldn’t work, but it does.

I love Captain Sam Wyndham in Abir Mukherjee’s crime series. He’s an ex-Scotland Yard detective and veteran of the First World War who has been scarred by his experiences and finds himself in Calcutta looking for a fresh start. He and his quick-witted Indian Sergeant, Surrender-not Banerjee, make a great team and I love the historical (1920s) setting of this series.

A compass point through the jugular and a set square through the heart are two of the murder weapons in Jonathan Pinnock’s very entertaining mathematical mystery The Truth about Archie and Pye. It’s a crime novel that will make you laugh out loud – which is refreshing in this genre! There are two more in the series (the third, The Riddle of the Fractal Monks, comes out in April).

There’s a heart-in-the-mouth, devastating scene in Jane Shemilt’s latest offering, Little Friends, where a lifeless child is discovered. I have a child of a similar age so it really got to me. She builds up to this scene so expertly. It’s a fantastic novel with a great premise – while the adults are misbehaving, what are the children getting up to?

I love using 16personalities.com to put my characters through rigorous personality tests and understand more about them beyond what I already know. The helpingwritersbecomeauthors.com blog (and podcast) is really helpful when I’m starting to write a book, I find it reading a few posts there helps get my brain into the right gear. And… Facebook! For research, I often ask friends for contacts or advice on there.

You know the phrase: dance like nobody’s watching? Well, I think sometimes it’s worth writing like nobody is reading. What I mean by that is it sometimes helps to just write for yourself. What book do youwant to write? What fun things would you do with your writing if you weren’t worried about how it would be received or judged? Give yourself the freedom to experiment and see what happens – you can always rein yourself in later, but maybe you’ll come up with a brilliant idea when you’re playing around! And while you’re at it, write a few pages every now and then longhand with a colourful felt tip pen. It makes the whole task feel less serious, I find, and less like it matters. You need to feel that sometimes, as a writer – it’s liberating.

About EMILY KOCH
Emily Koch is an award-winning journalist and writer living in Bristol with her family. Her second novel Keep Him Close came out in March 2020. Her debut, If I Die Before I Wake, was shortlisted for the CWA Ian Fleming Steel Dagger award, longlisted for Authors' Club Best First Novel Award, and selected as a Waterstones Thriller of the Month.

About KEEP HIM CLOSE 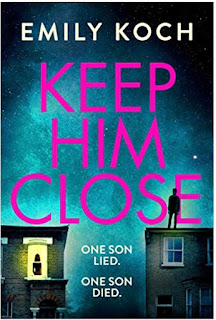 Publisher's description
Her head was bowed, and the hands braced on the chair arms were not like hands at all, but the dry dark claws of a bird ... The MacNamara sisters hadn’t been seen for months before anyone noticed. It was Father Timoney who finally broke down the door, who saw what had become of them. Berenice was sitting in her armchair, surrounded by religious tracts. Rosaleen had crawled under her own bed, her face frozen in terror. Both had starved themselves to death. Francesca MacNamara returns to Dublin after decades in the US, to find her family in ruins. Meanwhile, Detectives Vincent Swan and Gina Considine are convinced that there is more to the deaths than suicide. Because what little evidence there is, shows that someone was watching the sisters die ...

Keep Him Close was published by Harvill Secker on 19 March 2020.

Every Friday evening while we are all social distancing, Emily will be hosting a fun evening of book chat, games, giveaways, guest authors and even a book disco. 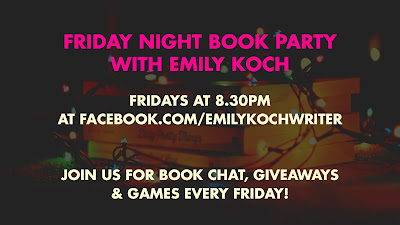 Posted by Victoria Goldman at 09:56