I am delighted that NEIL WHITE is joining me on my blog today for his Blog Tour. Neil's latest book - The Domino Killer - is being published by Sphere on 30 July 2015. 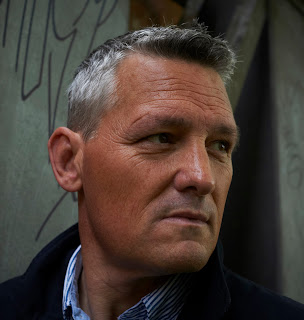 So Neil, what inspired you to write a book in the first place?
I wanted to write because I thought I could. That’s as simple as it gets, really. When I was at school, it was the one thing I was any good at.  Once I started writing, however, it was much more difficult than I’d imagined and I gained a new respect for those who’d put together a book. I went from thinking I could write to realising that I would have to work at it, and that it might turn out to be a long and difficult road. In fact, it turned out to be twelve years from first starting to signing a deal, with many bumps along the way.

Where do your ideas come from?
Thankfully, I only have to come up with one idea a year. I tend to look for things in real life as inspiration. For instance, my fourth book, Dead Silent, was based around the notion of what would happen if a reporter located Lord Lucan (the main character in that book was a crime reporter). Once I’d decided on that, I just changed and adapted the plot and characters until it reflected what I wanted.

Have your personal experiences influenced your writing? And if so, how?
They are bound to, and I do often use things from my own life as little asides or instances, or people I’ve met end up as characters. What I don’t know is how different the books would be if my experiences had been different. The books reflect me, I suppose, and I do try to make them northern and blunt, like a thump on the nose. If my life had been different, perhaps I’d have made them more flowery or wordy. As it is, I’ve settled for a thump on the nose.

Describe your writing style in 10 words or less?
Pacy, not too flowery, but easy to read.

Do you have any strange writing habits?
I’m very much a person of routine, principally because I’m scared of not finishing a book. I try to write a thousand words a day, and the first thing I do in the day is try to edit what I’d done the night before. A midnight poetic ramble can feel like pretentious nonsense when in the harsher light of morning.

What do you consider to be the hardest part of your writing?
The next word. I live in fear of getting stuck, and the worst part is when I’m around two-thirds through. I know the ending, I’ve written the first half, but how do I get to the end from where I am? It’s too near the end to rip it up and start again. And reviews. I don’t read them. Like most new writers, I hogged Amazon when I first started out, but I realised it was unhealthy. I wasn’t looking for constructive criticism, I was looking for gushing praise, and any lack of it would ruin my evening. So now I don’t look for reviews. The book is done, I can’t change anything, so let it fly and people will think what they think. Blissful ignorance is better sometimes.

How do you juggle your two careers - a criminal lawyer and a crime fiction author?
With difficulty. Time is precious, and fitting in writing books around a mentally tiring job like being a lawyer makes it hard. I’ve no current plans to give up being a lawyer but there might come a point when I decide I have to do one or the other.
Being a criminal lawyer does help me in my writing though, because it’s a world I’m comfortable in, but equally the mental effort required does sometimes feel like I’m not devoting enough to my writing.
I regard my writing as my main job now, although if we met at a dinner party, I would introduce myself as a lawyer, not a writer (unless you were a TV producer!). I think it’s because being a lawyer is what I am, what I trained to do, whereas writing is something I’ve managed to fluke. I feel privileged to be able to make a living from something I enjoy doing. I don’t treat it lightly.

Do you read? If so, who are your favourite authors?
I don’t read as much I’d like, due to the lack of time, but I’m a bit of a flitter. I don’t tend to follow a particular author or series but buy what I think looks good. There are some reliable ones though. I will usually buy a Michael Connolly or Lee Child or James Lee Burke or Greg Hurwitz. I have read a lot of British fiction recently, which was something I tended to avoid. I’ve always preferred American crime fiction as it is more escapism for me. British crime fiction will commonly touch on criminal law, and too many people get too many things wrong, which spoils the reading. If I read American fiction, I have no idea if it is right or wrong so I can just relax and enjoy the story.

If you were writing a book about your life, what would be the title?
'That Worked Out Okay'
I’ve been lucky and I know it. I was unemployed for so long during the eighties and was able to reinvent my life at a time when going to university wasn’t financially crippling. I was able to enter criminal law at a time when it was a profession worth entering. Now, the only people practising criminal law are the useless or those too old to change. I was lucky enough to land a publishing deal when so many others didn’t. I do wake up often and I’m still in that bedsit in Bridlington, with no money for food or heating and not knowing when the next good quid is coming from. I got lucky and I know it, and if it ended tomorrow I would smile about it.

What advice do you have for aspiring writers?
What you write at first will not be very good. If you think it is, you’re doing it wrong. Keep going, persevere, and eventually something will work out. Don’t try to be clever. Just write the story.

And lastly, why should people read your latest books?
People should read my latest paperback, The Death Collector, and hardback, The Domino Killer, because they're pacy and exciting and the pages will just turn. And because my children eat so much. And they might want to go to university, which is really expensive.

Neil White grew up in Wakefield in West Yorkshire before moving to Bridlington, a fish and chips town on the Yorkshire coast. He drifted there into his mid-twenties before returning to education and eventually qualifying as a solicitor in 1995. He is a criminal lawyer by day and a writer by night. He is published by Sphere and his ninth book, The Domino Killer, is the final book in the Parker brothers trilogy, with the second in the trilogy, The Death Collector, released in paperback in July 2015. His books are translated into French, German, Russian and Polish. 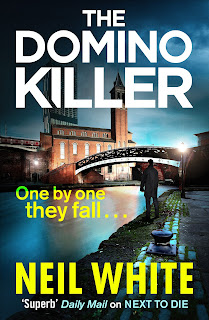 Synopsis:
When a man is found beaten to death in a local Manchester park, Detective Constable Sam Parker is one of the investigating officers. Sam swiftly identifies the victim, but what at first looks like an open and shut case quickly starts to unravel when he realises that the victim's fingerprints were found on a knife at another crime scene, a month earlier.
Meanwhile, Sam's brother, Joe - a criminal defence lawyer in the city - comes face to face with a man whose very presence sends shockwaves through his life. Joe must confront the demons of his past as he struggles to come to terms with the darkness that this man represents.
Before long, Joe and Sam are in way over their heads, both sucked into a terrifying game of cat-and-mouse that threatens to change their lives for ever...