BEST OF CRIME with Tammy Cohen 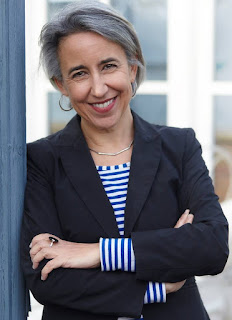 I’ve loved both of Liz Nugent’s books because they’re so fresh and different. Belinda Bauer’s originality makes her stand out in the crowded terrain of psychological thrillers. I’ve always loved Lisa Jewell’s writing, but her more recent venture into psychological suspense has given her books a darker edge, but still with her trademark focus on totally rounded, utterly believable characters, which is an unbeatable combination. Recently I’ve loved The Dry by Jane Harper, set in the parched outback in Australia. You can feel the relentless heat coming off the page.

Strangers on a Train is still the ultimate crime movie for me. The central concept of the Patricia Highsmith novel on which it is based – two random strangers swap murders - is so neat and perfectly self-contained. And the character of Bruno Anthony is such a brilliant psychological study. Oh, and all the most crucial action takes place in an amusement park, ending in an out-of-control carousel ride. Who could resist?

Like millions of others, our household was hooked on the first two series of Narcos where two DEA officers try to bring Colombian drug baron Pablo Escobar to justice. It’s the combination of a powerhouse central performance from Wagner Moura which shows the violence and cruelty of Escobar, who went from nothing to being one of the richest men in the world, and at the same time his vulnerability. But also the psychological interplay between the DEA agents and their quarry, and between Escobar and his various key henchmen. And all set against the breathtaking backdrop of Colombia itself.

... FICTIONAL KILLERS
As soon as I read Caroline Kepnes’ brilliant psychological thriller ‘You’, I fell a little bit in love with Joe Goldberg, a charming, witty, razor-smart New York bookseller, who just happens to be a stalker. And a psychopath. But somehow that doesn’t stop the reader from secretly willing him on. Genius.

... FICTIONAL DETECTIVES
Commandant Camille Verhoeven, the invention of French crime writer Pierre Lemaitre is a brilliant creation. At just four foot eleven (due to his mother’s heavy smoking during pregnancy), what he lacks in height he makes up for in intellect and determination and old-fashioned nobility. His own tragic past, which involved the murder of his beloved wife, has made him more intuitive to evil, but also to love.

... MURDER WEAPONS
I’m such a total wuss, I can’t read or watch very graphic violence. However, Robert Harris’s Mason Verger being fed to his own beloved pet pigs whom he has been cultivating purely for the pleasure of seeing them eat his nemesis Hannibal Lecter, has stuck in my mind.

I’m a big believer in the old adage ‘the truth is stranger than fiction’ and when I’m at a loose end for plot ideas, I’ll invariably end up googling ‘weirdest real life crimes’ or some variant thereof and then spending the rest of the day lost down the wormhole of bizarre human behavior. Although all too often I’ll get enthused about an idea before ruling it out on the basis that if I tried to put it in a novel, readers would claim it was too far-fetched.

Don’t show your first draft to anyone – unless you want to find yourself pulled in a myriad of conflicting directions.
If your interest is flagging, chances are your readers’ will be too. Think about the most shocking thing that might happen at this point. And then write it. You might not end up keeping it in, but at least it might have re-energised you.
Accept that some people won’t like what you write. That’s fine. Most of my favourite books have a low to average rating on Amazon. That’s because the writer hasn’t played safe. Which, conversely, is why those are my favourite books!

I drink a lot of coffee and green tea (not together, that would be weird), so the ideal writing snack has to be one that is eminently dunkable. I’m going to sound very dull here, but I favour the plain, simple, noble digestive. Please don’t stop buying my books now I’ve shared that.

Tammy Cohen wrote three dark contemporary novels (The Mistress’s Revenge, The War of the Wives, Someone Else’s Wedding) under the name Tamar Cohen, before deciding to move into crime, principally because crime writers always seemed to be having the most fun. Her psychological thrillers The Broken, First One Missing, Dying For Christmas, When She was Bad and They All Fall Down, have all been published internationally and When She Was Bad has been optioned for television. Tammy’s first historical novel, A Dangerous Crossing, written under the pseudonym Rachel Rhys, came out in March 2017 and has been shortlisted for the 2017 HWA Golden Crown Award. A Dangerous Crossing is one of Richard & Judy's Autumn 2017 Book Club Selection. As well as writing fiction, Tammy has worked as a journalist for over twenty years, writing for newspapers such as The Times, The Telegraph and magazines including Marie Claire, Cosmopolitan and Woman & Home.

About THEY ALL FALL DOWN 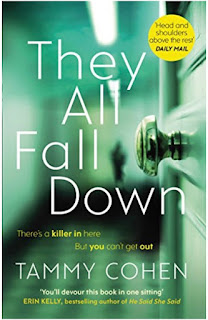 Publisher's description
Orange is the New Black meets One Flew Over the Cuckoo’s Nest. They All Fall Down is set in a private psychiatric clinic for women at high risk of self harm where Hannah Lovell is a patient. From the outset it’s clear she’s done something shocking, but we don’t know what. When two of Hannah’s fellow patients die in quick succession, suicide is the obvious assumption. Only Hannah is convinced there's a serial killer at large in the unit, preying on her friends. But who will believe she's telling the truth when she's proved so expert in lying to herself?

They All Fall Down was published by Transworld on 13 July 2017.

Posted by Victoria Goldman at 08:14

Email ThisBlogThis!Share to TwitterShare to FacebookShare to Pinterest
Labels: author interview, Best of Crime, Off-the-Shelf Books, Tammy Cohen, They All Fall Down, top crime movie, top reads, Transworld, When She Was Bad