BEST OF CRIME with Sam Carrington 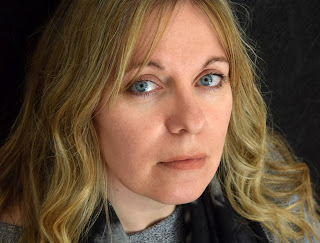 Sharon Bolton. I read Blood Harvest first and loved Sharon’s style of writing and so searched for her other novels. I went back to her first, Sacrifice, and after that began the Lacey Flint series. Her writing draws me in and the tight plotting and clever twists keep me reading.

Difficult to pin down to one film! I will choose Minority Report, though, because I can watch it again and again. I love the concept of this film and the PreCrime Department that deals with bringing in the criminal before they’ve committed the crime. Brilliantly done, highly entertaining. Love it!

Now this is hard as there have been loads of great crime-based TV shows. Happy Valley is a popular choice and I thought it was fantastic viewing, and the first series of Broadchurch almost destroyed me – I binge-watched the series, it was compelling viewing. But, I’ll choose Line of Duty for the ‘best of crime’ – I came to the series late and watched the second before the first, but I was drawn in completely by the characters and storyline. Keeley Hawes was amazing in this.

I usually think of Hannibal Lecter as my favourite killer (that sounds very wrong!) But I feel he’s had enough exposure, so I think it has to be Joe Carroll from The Following – he is devious, manipulative, yet a charmer.

Again, there are lots of great fictional detectives, but I have to choose Sherlock. He’s just so clever and the way his mind works tops all the other detectives!

A pencil! The scene from Dark Knight was short but to the point (see what I did there?) It was kind of horrifying and made me wince, but great all the same!

I have just finished watching The Sinner on Netflix – had to binge-watch!

*SPOILERS ahead*
The death (murder) scene on the beach was brilliant! A complete ‘OMG what the hell?’ moment. A real shocker and a fantastic hook. Loved it! (Although that sounds bad, but you know what I mean!)

I admit to Googling a lot, and so I find random sites for specific requirements! I do read Rebecca Bradley’s blog regularly. She worked for the police and has really informative pieces on her website. http://www.rebeccabradleycrime.com

Don’t leave long gaps between writing sessions… and don’t take onboard all the writing tips you read - not all of them will suit the way you work.

Jaffa cakes/oreos/crisps – OK, can’t choose the best! Anything goes as long as there are no nuts in it!


Sam Carrington lives in Devon with her husband and three children. She worked for the NHS for fifteen years, during which time she qualified as a nurse. Following the completion of a psychology degree she went to work for the prison service as an Offending Behaviour Programme Facilitator. Her experiences within this field inspired her writing. She now writes full time. SAVING SOPHIE, her debut psychological thriller, was published in September 2016 and became a Kindle eBook bestseller. Her second psychological thriller, BAD SISTER, was published as an ebook in October 2017 and will be out in paperback December 14th. 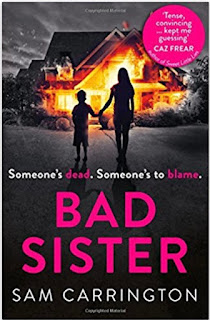 Publisher's description
Then
When flames rip through their family home, only teenager Stephanie and her younger brother escape unhurt. Brett always liked to play with fire, but now their dad is dead and someone has to pay the price.
Now
Psychologist Connie Summers wants to help Stephanie rebuild her life. She has a new name, a young son and everything to live for. But when Stephanie receives a letter from someone she’d hoped would never find her, Connie is forced to question what really happened that night. But some truths are better left alone . . .

Bad Sister was published by Avon in paperback on 14 December 2017.

Posted by Victoria Goldman at 07:45