It Was Her by Mark Hill

It Was Her
By Mark Hill
Published by Sphere (17 May 2018)
I received an Advance Reader Copy from the publisher. 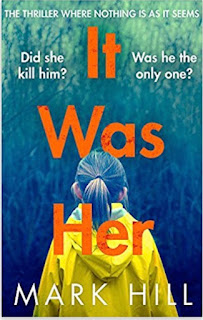 Do you want a thriller where nothing is as it seems?
Twenty years ago, Tatia was adopted into a well-off home where she seemed happy, settled. Then the youngest boy in the family dies in an accident, and she gets the blame.
Did she do it?
Tatia is cast out, away from her remaining adopted siblings Joel and Poppy. Now she yearns for a home to call her own. So when she see families going on holiday, leaving their beautiful homes empty, there seems no harm in living their lives while they are gone. But somehow, people keep ending up dead.
Did she kill them?
As bodies start to appear in supposedly safe neighbourhoods, DI Ray Drake and DS Flick Crowley race to find the thinnest of links between the victims. But Drake's secret past is threatening to destroy everything.

My verdict
Yet again, Mark Hill has written a gripping crime thriller. I loved His First Lie (originally called Two O'Clock Boy), so was excited to read It Was Her, which is the next book in the DI Ray Drake series.

This book is VERY dark and VERY twisted, with an air of mystery throughout, not just with the main plot, but also with the lead character Ray Drake. He's a complicated character to understand (conflicted, moody and damaged), and I can't say too much without revealing spoilers. To know more about his background, and his strained relationship with DS Flick Crowley, you should really read His First Lie before this book.

Mark Hill's writing is a pleasure to read, as it was in His First Lie too, with realistic dialogue and chilling descriptions of gruesome murders. With both books, I've found myself sympathising with some dubious characters, proving that not everything in life is clearcut and there's a definite grey area between 'good' and 'evil'. Can people really atone for the past?

It Was Her certainly kept me on my toes, trying to figure it all out (who was really to blame for events in the present and in the past?) and also left me wanting more (in a good way). Bring on the next book in the DI Ray Drake series! 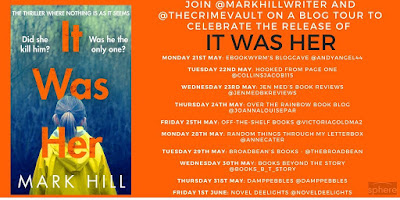