The Ringmaster by Vanda Symon

The Ringmaster
By Vanda Symon
Published by Orenda Books (E-book - 18 February 2019; Paperback - 18 April 2019)
I received an Advance Reader Copy from the publisher 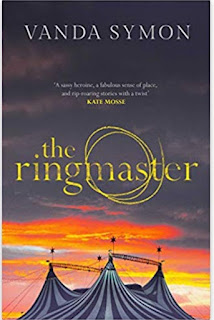 Death is stalking the southern South Island of New Zealand...
Marginalised by previous antics, Sam Shephard, is on the bottom rung of detective training in Dunedin, and her boss makes sure she knows it. She gets involved in her first homicide investigation, when a university student is murdered in the Botanic Gardens, and Sam soon discovers this is not an isolated incident. There is a chilling prospect of a predator loose in Dunedin, and a very strong possibility that the deaths are linked to a visiting circus…
Determined to find out who’s running the show, and to prove herself, Sam throws herself into an investigation that can have only one ending…

My verdict
I adored this book so much - it made me laugh, cry, grimace and cheer. The Ringmaster is the second book in this crime fiction series set in New Zealand. The writing is fabulous and, as with the previous book, Overkill, I was drawn straight into the story by the chilling prologue.

Vanda Symon writes with a distinctive style, with acute observations, vivid imagery, sharp witty dialogue and plenty of humour. I actually laughed all the way through the book - other than one scene that made me cry, but more on that shortly. Some crime novels could be set anywhere in the world, but The Ringmaster definitely brings the New Zealand setting to life. I found myself Googling locations, towns and even plant life, so that I could picture them as I read onwards.

Sam Shephard is a brilliant character and highly likeable. She's headstrong and determined and doesn't always do what she's told, which has a habit of getting her into trouble - especially in The Ringmaster, as her boss is giving her a very hard time. Sam is very 'normal' and, while she's far from perfect, she doesn't have any of the hang-ups often found in crime fiction protagonists. I love her friendship with her best friend, Maggie, which lightens up the darkness of the plot, and also her relationship with her parents and colleagues.

Not only are all of the characters in the book well rounded but they are also brilliantly described (both humans and animals). They all feel very real - I know this is the case due to the scene mentioned above that not only had me on the edge of my seat but also triggered tears.

In summary, The Ringmaster wowed me with its twisty journey, weaving various threads together, right through the shocking, and surprising, ending. This gripping series is a definite 'must read' for me - and anyone else who loves entertaining, humorous crime fiction with plenty of heart.

Posted by Victoria Goldman at 11:45