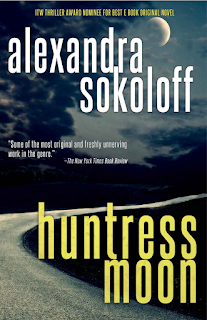 Publisher's description
FBI Special Agent Matthew Roarke is closing in on a bust of a major criminal organisation in San Francisco when he witnesses an undercover member of his team killed right in front of him on a busy street, an accident Roarke can't believe is coincidental. His suspicions put him on the trail of a mysterious young woman who appears to have been present at each scene of the years-long string of 'accidents' and murders, and who may well be that most rare of killers: a female serial.

Roarke's hunt for her takes him across three states, while in a small coastal town, a young father and his five-year-old son, both wounded from a recent divorce, encounter a lost and compelling young woman on the beach and strike up an unlikely friendship without realising how deadly she may be.

As Roarke uncovers the shocking truth of her background, he realises she is on a mission of her own, and must race to capture her before more blood is shed.

My verdict
Huntress Moon is an exceptionally well-plotted crime thriller exploring the fine line between good and evil.

Investigating a series of murders, FBI Special Agent Matthew Roarke believes that a serial killer is on the loose. It seems that the highly skilled killer is a woman, yet female serial killers are virtually unheard of. On the surface, the Huntress appears to be a cold, calculating character, but it's possible that there could be more to her than meets the eye. As the story unfolds, it appears that she is on a mission - and is determined that nothing will get in her way.

The book dives straight into the action and doesn't stop, with its fast-paced descriptions and snappy dialogue.  For me, the characters really came alive as the Huntress and Roarke pit their wits against each other. The tension builds up and the two characters get closer to colliding - and when they do, it's quite explosive.

By alternating chapters between the two main protagonists, the author has created an intriguing cat and mouse chase that grabbed my attention all the way through. I didn't want the book to end, so it's just as well there are another two in the series.