Lament the Common Bones
By Jen J Danna and Ann Vanderlaan
Published on 21 November 2017
I received an Advance Reader Copy from the authors. 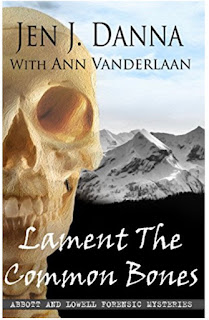 When death hides in plain sight, only the most discerning eye can see the truth.
Forensic anthropologist Dr. Matt Lowell and his team of grad students don’t go looking for death—it usually comes to them. But when one of Matt’s students suspects the skeleton hanging in a top competitor’s lab is actually from a murder victim, Matt has no choice but to sneak in to confirm a suspicious death. Once the case comes to Massachusetts State Police Trooper Leigh Abbott, the team is back together again.
While trying to handle the new murder case, Matt and Leigh also uncover new evidence behind the mysterious deliveries intended to smear the name of Leigh’s father, an honored cop, fallen in the line of duty four years before. When the person behind the deliveries is finally uncovered, it becomes clear that lives are in jeopardy if they attempt to thwart him. At the same time, as the murder case delves into underground societies and grows complicated when the killer himself becomes a victim, it will take all of Matt and Leigh’s teamwork to solve both cases and escape with their lives.

My verdict
Lament the Common Bones is the fifth in the Abbott and Lowell Forensic Mysteries series. The first three books in this series were the first three novels I ever reviewed on this blog in December 2014/January 2015. You can find the links below. Then I reviewed the fourth book in February 2015 - the link is below too.

Reading Lament the Common Bones was like coming back to old friends I haven't seen for a while. I easily slipped back into the characters' lives, with everything falling into place straight away. I remembered the sizzling chemistry between Matt Abbott and Leigh Lowell - and how much I loved all of the characters in the books, including Matt's team of grad students who have their own distinctive quirks and traits.

Although I've mentioned this is the fifth in the series, I do believe that you could read this easily as a standalone as you don't need back story to understand and appreciate the depth of the writing. The fast-paced plot is an intriguing and complex one. A skeleton hanging in a forensics lab seems to be from a murder victim, but how did it get there and why? Meanwhile, Leigh is receiving mysterious deliveries, suggesting her deceased father was a dirty cop - is someone trying to frame him?

I'm still loving this series three years on. It's definitely a worthy rival to Kathy Reich and Patricia Cornwell, who are often thought of as the queens of forensic crime fiction. The Abbott and Lowell series is new, fresh, exciting and interesting, with forensics explained clearly without detracting from the plot. I'm hoping there's still more to come.

Posted by Victoria Goldman at 12:45