BEST OF CRIME with Guy Bolton 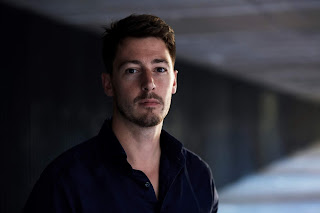 Dennis Lehane. A lot of crime writers are happy to stick to their detective character series but Lehane has managed to combine that with some really top-notch standalone thrillers. Being a film lover, I’ve enjoyed the movie adaptations of his books but Mystic River, Live By Night, Gone Baby Gone and Shutter Island are also brilliant novels in their own right. If anything he’s just one of the best literary thriller writers out there today.

My Jonathan Craine novels are about Hollywood in the ‘30s and ‘40s so obviously movies have had a big influence on my writing. I’m a big fan of classic noirs and Out of the Past was one of the early inspirations for The Syndicate. I notice a lot of people say my writing style is very cinematic and I think big bold crime films like LA Confidential, The Godfather, Heat and All the President’s Men have really helped shape my thrillers.

I’m a big fan of David Simon generally but The Wire has had a huge impact on me. It demonstrated the ability of the crime genre to be entertaining and thrilling whilst asking serious questions about society. That was a big influence on my new novel The Syndicate. It couldn’t recommend it highly enough.

Patrick Bateman. American Psycho is grim reading but the first one hundred pages or so are really more of a blackly comic satire on wealth and ‘80s excess than anything else. I find the book endlessly quotable. And for someone so absolutely heinous, there’s something indescribably empathetic about Patrick. That’s some achievement.

Martin Cruz Smith’s investigator Arkady Renko. My uncle introduced me to Gorky Park and Polar Star and he’s without doubt my favourite detective. It’s his black sense of humour that I like more than anything. It’s something I’ve tried to instill in my protagonist Jonathan Craine. Whatever the circumstances, however bad things get, I like to think he can just about see the funny side of things.

Garrote. Craine faces one in The Syndicate. I mean can you imagine anything worse?

I’ll refer again to American Psycho. Some are quite funny. But other scenes are so horrific I that I have to stop reading. Even thinking about it now I’m starting to feel queasy…

I’m a bit of a luddite. I tend to scan through Wikipedia for general research and then from there find books and sources I can track down in the British Library. I’m pretty old school at times. For The Syndicate I spent a lot of time reading old newspaper clippings on the microfilm reader.

Lots of writers talk about skill and craft but the discipline to write regularly and consistently is probably key when you’re starting out. Particularly for those with full time jobs and / or families. It’s a lot like exercise, you really just need to find the time and ask those around you to be supportive of it. After that it simply becomes routine. Even if you wrote a thousand words a week, you’d have a book in two years. That’s not bad going by any means.

Bananas and nuts to keep me going between meals. But I’m a tea addict - I’ll easily put away 5 cups a day. In fact, I think I’ll put the kettle on right now…

About GUY BOLTON
Guy Bolton is an author and screenwriter based in London. Guy’s first novel The Pictures, a detective thriller set in 1930s Hollywood, was shortlisted for a CWA Dagger award. It was listed as one of the top 10 crime books of 2017 by critics of the Telegraph, The Times and the Mail on Sunday. The Syndicate is out in Hardback October 4th. 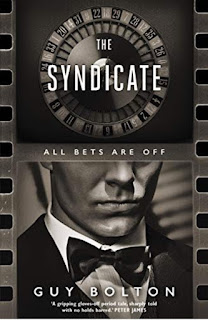 Publisher's description
June 1947.
Jonathan Craine has left his old life in Hollywood behind him, content to live out his days with his son on a rural farm in California. But when infamous mobster Bugsy Siegel is murdered, Craine is forced to face his past once again.
Summoned to Las Vegas to meet mob head Meyer Lansky, Craine is given the impossible task of finder Siegel’s murderers. All he has to help him is an ageing hit man and a female crime reporter with her own agenda. And he knows that if he doesn’t succeed in five days, both he and his son will pay for it with their lives…

The Syndicate is published by Point Blank on 4 October 2018.

Posted by Victoria Goldman at 08:03