The next First Monday Crime is taking place on Monday 3rd June 2019. 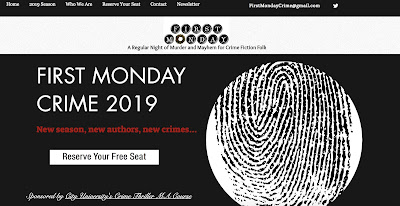 As Steph Broadribb, I write the Lori Anderson action thriller series for Orenda Books. When researching the books I trained as a Bounty Hunter in California and travelled around the US scouting locations. My debut thriller – DEEP DOWN DEAD – was shortlisted for the ITW Best First Novel, the eDunnit eBook of the Year award, the Dead Good Reader Award for Fearless Female Character, and Dead Good Reader Award for Most Exceptional Debut. The second book in the Lori Anderson series – DEEP BLUE TROUBLE – came out in January 2018, with the third DEEP DIRTY TRUTH published in ebook in November 2018 and in paperback in January 2019.

As Stephanie Marland,I write the Starke/Bell psychological police procedural series for Trapeze (Orion). This series draws on my own experience as a blogger and the research I did (when working at a university for my day job) into human behaviour in online groups. The first book – MY LITTLE EYE – came out in April 2018, with the second – YOU DIE NEXT – due to be published in ebook and paperback in April 2019.

I’m a founder member and writing coach at www.crimefictioncoach.com

I was born in Birmingham and grew up in Buckinghamshire, and most of my working life has been spent between the UK and USA. I’m an alumni of the MA in Creative Writing (Crime Fiction) at City University London, and a member of the International Thriller Writers (ITW) and Sisters In Crime organisations. I currently live in Buckinghamshire surrounded by horses and trying to wrangle an unruly but adorable puppy!

Elodie Harper is a reporter and presenter at ITV News Anglia.  She's worked as a journalist for the past decade, including for Channel 4 News, ITN and BBC radio.  Her job has seen her join one of the most secretive wings of the Church of Scientology and cover the far right hip hop scene in Berlin, as well as crime reporting in Norfolk, where her novels are set.
In 2016, her story Wild Swimming won a short story competition judged by Stephen King.  It was published later that year by Cemetery Dance in the anthology Six Scary Stories: Selected and Introduced by Stephen King.
Elodie's debut novel The Binding Song, was published by Hodder & Stoughton in 2017 and was followed by The Death Knock in July 2018.

Marnie Riches - compère for the evening

Marnie Riches grew up on a rough estate in Manchester, aptly within sight of the dreaming spires of Strangeways prison. She swapped those for the spires of Cambridge University, gaining a Masters degree in Modern & Medieval Dutch and German. She has been a punk, a trainee rock star, a pretend artist and professional fundraiser. In her spare time, she likes to spin, renovate houses and paint. Oh, and drinking. She likes a drink. And eating. She likes that too. Especially in exotic destinations.
Having authored the first six books of HarperCollins Children’s Time-Hunters series, her award-winning, best-selling George McKenzie crime thrillers for adults were inspired, in part, by her own youth and time spent in The Netherlands as a student. Marnie’s best-selling, critically acclaimed Manchester series about the criminal underworld of the UK’s second city took its inspiration from growing up on a rough estate in North Manchester’s infamous cultural melting pot, Cheetham Hill. Born Bad and the real life gangland stories that form part of the city’s sub-cultural heritage were featured on CBS Reality’s international hit documentary, Written In Blood.
Tightrope – the first story in a series about flawed but fearless PI, Bev Saunders, launches Summer 2019 and is a must-read for fans of Martina Cole, Lynda la Plante & Kimberley Chambers.
Marnie appears regularly on BBC Radio Manchester where she discusses the day’s social media trends on Phil Trow’s drivetime show.

We'll all be cheering them on - on social media and in real life!

As a reminder, if you want a survival guide to First Monday, including how to get there, check out my post from last month here.

Posted by Victoria Goldman at 07:54