Today, I am delighted that PAUL E. HARDISTY is my next victim (I mean, guest) taking part in my Author in the Spotlight. Turbulent Wake was published in paperback by Orenda Books on 16 May 2019. 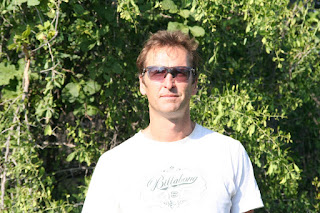 In many ways, Turbulent Wake is very different from your action-packed Claymore Straker series, exploring a father-son relationship, although the writing is just as stunning. What prompted you to write something so different this time?
Absolution was the last instalment of the Claymore Straker series. It wrapped up Clay’s story, at least for now, and sent him and Rania off onto the next stage of their lives. I really don’t know what the future will hold for them - it’s up to the reader. I have wanted to be a writer since I was eighteen, and there are so many ideas and fragments of stories I have collected since then, a lifetime of the stuff packed into journals and notebooks and rattling around in my head. In many ways, I have been working on Turbulent Wake since I was eighteen. I guess after thirty-five years it was time to pull it all together. The stuff I am working on now, when I have the time, is different again. Except for the writing – on that I just want to keep improving.

Turbulent Wake is very much a journey, not only through your characters’ lives and experiences, but also around the world, through Africa, the Caribbean, London, Canada, South America, USA, Turkey and many more diverse locations. Are these all places you have visited (and visited recently)? How did you ensure that your descriptions were true not only to the specific locations mentioned, but also the time period that each particular chapter focused on?
Turbulent Wake is essentially a fictionalised autobiography. It is all very personal, from boyhood memories to adult disappointments. The settings are all places I know well, in a detailed, footprint-in-the-sand, wind-in-your-face kind of way.  As the father, Warren, muses towards the end, life is nothing more than a series of events, some of which might be worth remembering or even sharing with someone else, most not. So yes, it’s all very close.

By the end of Turbulent Wake, I felt as though I knew your main characters (Ethan and Warren) very well. How did you make sure that you got to know them so well while you were writing the book? Is there any of you in each of them?
This was the most difficult and the easiest book I have written. Easy because it’s so close to me, all of it. My mum read an early version and had a really hard time. It’s dedicated to her. It was also intensely difficult to write for exactly the same reason. It’s hard to strip away the protective shroud and explore things you have tried not to think about for decades.

Exploring how our past shapes us (and our relationships with family and friends) is a common theme in your books. What inspires you to explore this?
I am fascinated by the concept of chance.  Luck. Destiny. The blind, impassive, uncaring, arrow of time.  Call it what you may. So much of who we all are is determined by this. Who are parents are. Where and when we are born. The apparently random decisions made by others. Buffeted by these fates, we navigate through our lives as best we can, making mistakes, sometimes learning, always struggling. It makes you. And then, it’s over.  That’s what Turbulent Wake is all about: navigating this stormy sea, and the turbulence each of us leaves behind.


Your books always manage to educate me with their underlying environmental themes. Is this something you specifically set out to do when writing them or is this just the way they evolve, due to your own background as an engineer and environmental scientist?
The environment, as we call it, is the planet. It’s where we live. It supports all life, including ours. Without it, we would not exist. In the past, the environment (nature) was something awesome, unimaginably huge and powerful. Every day was a struggle to survive. The environment was a threat, something to be feared, conquered, and ultimately, defeated. Our literature is full of this story, from Beowulf to Moby Dick. But now, everything has changed. The 21st Century is completely different. The environment is now everywhere degraded, polluted, under threat. Extinctions are commonplace. True wilderness has disappeared. In all our history, we have never lived in this kind of world. One in which the environment itself is at risk, and we are the ones to be feared. It is a fundamental and unprecedented shift in the human condition. I want to write books for and of the 21st Century. This theme is, for me, inescapable.

What's the most interesting place you have visited when researching one of your books? And what's the strangest?
Until now, all of my books have been set in places and based on events that are very close to me. So research has been limited. I guess you could say my life and work as an engineer has been my research. The most amazing place I have lived and worked was Yemen – a cruel, beautiful, tragic place, now once again engulfed in civil war. My first novel The Abrupt Physics of Dying, is set there, during the 1994 civil war. I was there when the war broke out. The strangest place I’ve lived and worked has got to be the USA. Extremes of poverty and wealth, education and ignorance, avant-guard thinking and the deepest conservatism side-by-side everywhere you go. And big, in every way.

If you were writing a book about your life, what would the title be?
Turbulent Wake.

What advice would you give your younger self?
Don’t waste a single minute.

And lastly, why should people read Turbulent Wake?
The decisions we make echo through time, profoundly shaping our own lives and those of the people we are closest to.  Everyone lies, not only to protect themselves, but to protect, and sometimes to hurt, others. Life is one big mystery. Can the truthful account of a few key moments in one man’s life unravel part of the mystery? If that sounds fun, give it a go.

Canadian Paul E Hardisty has spent 25 years working all over the world as an engineer, hydrologist and environmental scientist. He has roughnecked on oil rigs in Texas, explored for gold in the Arctic, mapped geology in Eastern Turkey (where he was befriended by PKK rebels), and rehabilitated water wells in the wilds of Africa. He was in Ethiopia in 1991 as the Mengistu regime fell, and was bumped from one of the last flights out of Addis Ababa by bureaucrats and their families fleeing the rebels. In 1993 he survived a bomb blast in a café in Sana’a, and was one of the last Westerners of out Yemen before the outbreak of the 1994 civil war. Paul is a university professor and CEO of the Australian Institute of Marine Science AIMS). The first four novels in his Claymore Straker series, The Abrupt Physics of Dying, The Evolution of Fear, Reconciliation for the Dead and Absolution all received great critical acclaim and The Abrupt Physics of Dying was shortlisted for the CWA John Creasey (New Blood) Dagger and was a Daily Telegraph Thriller of the Year. Paul is a sailor, a private pilot, keen outdoorsman, conservation volunteer, and lives in Western Australia. 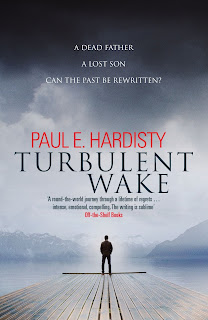 Ethan Scofield returns to the place of his birth to bury his father. Hidden in one of the upstairs rooms of the old man’s house he finds a strange manuscript, a collection of stories that seems to cover the whole of his father’s turbulent life.
As his own life starts to unravel, Ethan works his way through the manuscript, trying to find answers to the mysteries that have plagued him since he was a child. What happened to his little brother? Why was his mother taken from him? And why, in the end, when there was no one else left, did his own father push him away?

Read a snippet of my review:  "Turbulent Wake really showcases the author's writing talent. I read it twice because I loved it so much and to appreciate and discover the many layers. I could read this book forever and it's likely to become one of my all-time Orenda favourites." 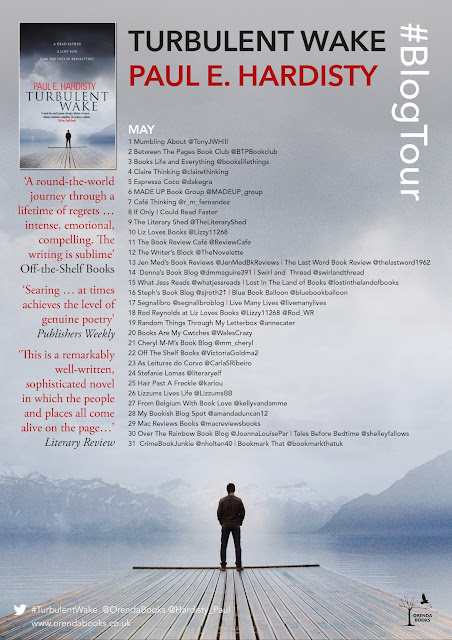 Posted by Victoria Goldman at 07:53