AUTHOR IN THE SPOTLIGHT - Steve Cavanagh

I am delighted that STEVE CAVANAGH is joining me on my blog today. Steve's book - The Defence - was published by Orion on 12 March 2015. 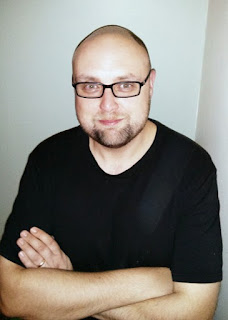 So Steve, what inspired you to write a book in the first place?
Until 2011, I'd always had the vague notion that I'd like to write but I had no real plans to start, just a vague wish that I truly had little intention of acting upon. I'd written screenplays about 15 years before, but never got any sold so I'd given up on the writing. Then in 2011, my mother passed away quite suddenly. She was the only person who ever encouraged me to write, so I wanted to honour that faith. I wrote The Defence for her, knowing she would never read it.

Where do your ideas come from?
Everywhere. Mostly they are crazy, high-concept 'What if?' kind of ideas that no real sane person should ever think about. The Defence came out of two ideas. I was trying to think about the worst possible situation for a lawyer to be in – then I got it. What if a lawyer had to stand up in court and conduct a trial with a bomb strapped to his back? What if his client was holding the detonator? Yeah, that’s pretty bad. Once I had that idea I immediately started thinking about how I could make that situation worse. Much worse.

Have your personal experiences influenced your writing? And if so, how?
The idea for the character of Eddie Flynn came to me one day during a trial. I’m a lawyer during the day, so I was cross-examining a witness and I kind of conned him into telling the truth. It struck me at that moment that trial lawyers and con artists share a lot of the same skills – misdirection, persuasion, manipulation, distraction etc. So the basis for Eddie’s character was formed.

Do you have any strange writing habits?
I write at night – but a lot of writers do the same. I like to have a lot of coffee on the go at the time. I suppose I’m pretty normal – I don’t have to have a certain mood, or music, or absolute silence. I think very few writers get precious about their environment or habits. As long as I’ve got the essentials; a little peace and quiet, I’m naked and wearing a rasher of bacon. You know, just the basics.

Do you plot out the whole book before you start or just start writing and see where it leads you?
I know nothing about the book before I start. Well, I know a little. I know the opening and maybe a wee bit about what happens later on. I’ve yet to start a book knowing the ending. So I don’t plan, I write line by line.

What do you consider to be the hardest part of your writing?
Time. I’ve got two small kids, a loving and understanding wife, a full time job and a dog. The hardest part is trying to balance all of those things.

Has your life changed since becoming a published author? If so, how?
It has changed so much. Financially it’s a different universe. I’ve been able to travel and the best thing has been meeting other writers. I’ve made a lot of good friends.

Do you read? If so, who are your favourite authors?
Michael Connelly, John Connolly, Raymond Chandler, Lee Child, and a host more.

If you were writing a book about your life, what would be the title?
Reaching For The Ground. Or, to make it sell – The Girl On The Tram, With The Funny Tattoo, In The Red Jumper, Who Dissappeared And Never Came Back.

What advice do you have for aspiring writers?
Write with desperation.

And lastly, why should people read The Defence?
The Defence is my debut novel, it’s about Eddie Flynn, a former con artist turned street-smart New York lawyer. It’s a been a year since Eddie Flynn vowed never to set foot in a courtroom again. But now he doesn’t have a choice. Olek Volchek, the infamous head of the Russian Mafia in New York, has strapped a bomb to Eddie’s back and kidnapped his ten-year-old daughter, Amy. Eddie’s got 48 hours to defend Volchek in an impossible murder trial – and win – if he wants to save his daughter. Under media and FBI scrutiny, Eddie must use his razor-sharp wit and every con-artist trick in the book to defend his client and ensure Amy’s safety. The Defence should appeal to fans of John Grisham, Lee Child and Michael Connelly.

Steve Cavanagh was born and raised in Belfast and is a practising lawyer. He holds a certificate in Advanced Advocacy and lectures on various legal subjects (but really he just likes to tell jokes). He is married with two young children. The Defence, has been chosen as one of Amazon's great debuts for 2015, as part of their Amazon Rising Stars programme. In 2015, Steve received the ACES award for Literature from the North Ireland Arts Council.

The Defence sparked an international publishing bidding war for the rights in the first Eddie Flynn novels. Synopsis:
Eddie Flynn used to be a con artist. Then he became a lawyer. Turned out the two weren't that different.

It's been over a year since Eddie vowed never to set foot in a courtroom again. But now he doesn't have a choice. Olek Volchek, the infamous head of the Russian mafia in New York, has strapped a bomb to Eddie's back and kidnapped his ten-year-old daughter Amy.

Eddie only has forty-eight hours to defend Volchek in an impossible murder trial - and win - if he wants to save his daughter.

Under the scrutiny of the media and the FBI, Eddie must use his razor-sharp wit and every con-artist trick in the book to defend his 'client' and ensure Amy's safety. With the timer on his back ticking away, can Eddie convince the jury of the impossible?

Lose this case and he loses everything.

Posted by Victoria Goldman at 11:13