Hunt for the Enemy by Rob Sinclair - Blog Tour 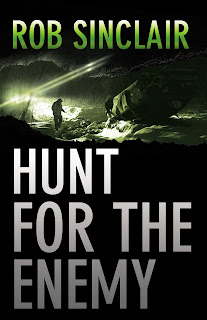 Publisher's description
The breathtaking and action-packed finale to the bestselling Enemy series. The Hunt is on. They've erased his past. Wiped out his very existence. But Carl Logan isn't finished yet. On the run in a harsh Russian winter, Logan - once an invaluable asset but now branded a traitor - has been framed for murder. His own firm, the secretive Joint Intelligence Agency, have labeled him a rogue operative after two decades of loyal service. The agency is hunting him down... and they're not the only ones. But there's much more at stake than just Logan's life. One by one, agents and informants from all sides, all allegiances, are dying. And Carl Logan is the only man who can put a stop to it, once and for all.

My verdict
Hunt for the Enemy is a rollercoaster ending to a great series, as yet again Rob Sinclair has written an excellent action thriller, perfect for fans of Jack Reacher and Ben Hope.

Reading this book felt like coming back to an old friend, as it brings back characters from previous books as well as some new ones. Special Agent Carl Logan is on the run, yet he isn't sure exactly who from, as there appear to be many people and agencies hunting him down. The plot is filled with corruption and deception, as you follow his journey through Russia and Kazakhstan. The story is fast paced, dramatic and intriguing. There are several subplots that all tie up together well at the end, resulting in an explosive finale that will leave you reeling.

People often ask me whether certain books in a series can read as standalones. With Hunt for the Enemy, I suggest you read Book One (Dance with the Enemy) and Book Two (Rise of the Enemy) first, not just to get the background to the characters, but because they are also excellent reads.


Read my review of Dance with the Enemy (Book 1) here.

Read my review of Rise of the Enemy (Book 2) here.

Posted by Victoria Goldman at 08:22