BEST OF CRIME with Angela Clarke

for her Trust Me blog tour 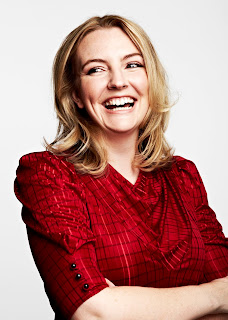 Agatha Christie. Her writing, characters, plots, ideas and intrigues have stood the test of time, and still delight new readers now. She’s my go-to author for relaxation. If I need to hide from this world, I’m probably in one of hers.

... FILMS/MOVIES
The Usual Suspects. It’s the first time I remember being blindsided by a twist. That feeling of disbelief, realisation, acceptance, and ultimately awe, has stayed with me. Plus, it’s an exquisite performance by Spacey.

... TV DRAMAS
I should probably say something gritty and cutting edge, but though I enjoy a wide range of shows, my heart will always belong to Midsomer Murders. My lifelong ambition is to write an episode. They’ve already done a crime writing festival themed one, so I think I’d go for a library set one (crushed by falling books, stamped to death with the date stamp, or, based on my university library, decapitated by a Paternoster lift). You can tell I haven’t thought about this at all.

... FICTIONAL KILLERS
The unnamed protagonist serial killer in Graeme Cameron’s Normal. Deliciously dark, shocking, hilarious, and heart-breaking in places. Graeme’s masterful exploration of his main character leaves a lasting impression, and the reader in the unusual position of rooting for the killer.

... FICTIONAL DETECTIVES
You’d never guess that I write gritty thrillers, full of cutting edge technology and swears, from my answers, but… I have to say JB Fletcher. Angela Lansbury’s character in Murder, She Wrote. I have watched every episode I’ve ever managed to get my hands on. I think she’s a terrific character – unflappable. She never raises her voice, or becomes hysterical, regardless of the level of threat she suffers, and despite being both ‘older’ and female. When Murder, She Wrote started in 1984, a time when Morse was still trying to hit on every woman in sight, and the ladies in his show were rendered mute by the sight of blood, JB was what we’ve come to recognise as a strong female character. She’s a badass in a cowl neck.

... MURDER WEAPONS
A frozen leg of lamb, in Roald Dahl’s short story Lamb to Slaughter. If you haven’t read it, make time immediately. You won’t regret it.

... DEATH SCENES
The Hidden Depths Midsomer Murders episode. The victim (who is wholly unpleasant, natch), is pegged to the grass with croquet hoops, while bottles of wine are catapulted at him until he meets his claret tinged demise. They say too much alcohol will kill you…

... BLOGS/WEBSITES
I really like https://www.brainpickings.org. Technically, it’s not a research, a writing, or a crime website, but sometimes it covers all those things. It’s a fascinating digest of interesting ideas, philosophies, and creativity. At the time of writing the this, the latest articles are:

1. The Doom and Glory of Knowing Who You Are: James Baldwin on the Empathic Rewards and What It Means To Be An Artist.
2. A Laboratory for Feeling and Time: Pioneering Philosopher Susanne Langer on What Gives Music Its Power and How It Illuminates the Other Arts.
3. In Their Lives: Great Writers on Great Beatles Songs
There is always something inspiring on there.

... WRITING TIPS
Ask yourself what is the main conflict at the centre of your plot? That’s the tension that holds your story together, and drives the action forward. Find that and you’ve found your flow.

... WRITING SNACKS
Dark chocolate covered ginger biscuits. Dark chocolate contains anti-oxidants, and everyone knows ginger is good for digestion. They’re practically one of your five a day. And they give a satisfying crunch and warmth at 3am when I’m on deadline.

Angela is a bestselling author, playwright, screenwriter and presenter. The second instalment in her Social Media Murder Series Watch Me, shot straight up to number 15 in the UK Paperback Chart in January 2017. Her debut crime thriller Follow Me was named Amazon’s Rising Star Debut of the Month January 2016, long listed for the Crime Writer’s Association Dagger in the Library 2016, and short listed for the Dead Good Page Turner Award 2016. Follow Me has been optioned by a TV production company. The third instalment in the series Trust Me is out June 2017. Angela’s humorous memoir Confessions of a Fashionista is an Amazon Fashion Chart bestseller. Her play, The Legacy, enjoyed a sellout run at The Hope Theatre in June 2015.
Angela has given talks, hosted events, and masterclasses for many, including Noirwich Crime Writing Festival,  Camp Bestival, Panic! (in partnership with Create, the Barbican, Goldsmiths University and The Guardian), Meet a Mentor (in partnership with the Royal Society of Arts), Northwich Lit Fest, St Albans Lit Fest, BeaconLit, and the London College of Fashion. She also hosted book show Tales From Your Life on BBC 3 Counties, the current affairs radio show Outspoken on Radio Verulam in 2015, and has appeared regularly as a panel guest on BBC 3 Counties, BBC Radio 4, and the BBC World Service, among others.
In 2015 Angela was awarded the Young Stationers' Prize for achievement and promise in writing and publishing. She also works for The Literary Consultancy critiquing manuscripts and mentoring. Angela, a sufferer of the debilitating chronic condition Ehlers Danlos III, is a Fellow of the Royal Society of Arts, volunteers with Womentoring, Meet a Mentor and at HM Prisons. She is passionate about bringing marginalised voices into the industry. 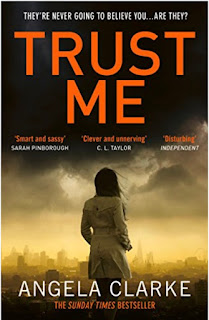 Publisher's description
YOU SAW IT HAPPEN. DIDN’T YOU?
What do you do if you witness a crime…but no-one believes you?
When Kate sees a horrific attack streamed live on her laptop, she calls the police in a state of shock. But when they arrive, the video has disappeared – and she can’t prove anything. Desperate to be believed, Kate tries to find out who the girl in the video could be – and who attacked her.
Freddie and Nas are working on a missing persons case, but the trail has gone cold. When Kate contacts them, they are the only ones to listen and they start to wonder – are the two cases connected? 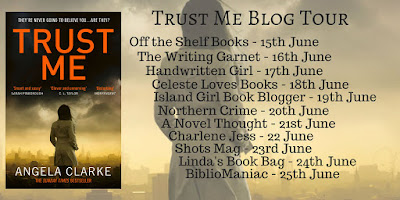