I am delighted to be today's stop on the BLOG TOUR for Nadine Dorries' Ruby Flynn, which was published by Head of Zeus on 3 December 2015. 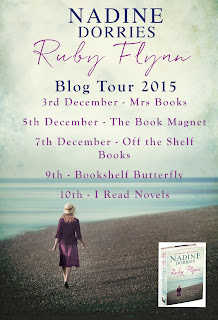 It was the first time, since the storm, that she had been entirely alone, with no one needing, instructing or wanting her. For the first time since she had been rescued from the storm, she had a whole day to herself and no one expected anything of her. She could do exactly as she pleased.
The sun rose in the east and she turned away from the glare, into the west. The smell of the wet pungent earth stung the inside of her nostrils, and she could hear every noise as though it were ten times louder than it actually was. The sound of the squeak on the front wheel as it went round and round, the crunch of the wheels as they met and churned the gravel in the rough road. The birds twittering, the river roaring and even the silence of the bog.

She shouted hello to every man and woman she passed on the roads and stopped whenever she was waved down to be handed a drink by women standing in front of their cottages who saw her ride by. Ruby knew it was the custom to make this gesture to all travellers on the road.

This was not Ruby’s usual life. Today she was someone else. She was simply a girl on a bike out for the day, visiting the place she thought of as home.

The first hour flew by in a haze of joy. There were many conversations with strangers at gates, as they dipped metal cups into a rain barrel and handed her an oat biscuit, each wanting her to stop and give them news of wherever she had come from. They were all desperate for gossip. But Ruby had no time to chat, for long.

She called into the store at Bangor Erris and was directed on her way by the shopkeeper.

‘My sister’s boy works at the inn at Doohoma,’ she shouted after Ruby, puzzled by her urgency. No one rushed anywhere in Mayo.

As she left Bangor Erris, her mood altered. Her feet pushed slower and her heart beat faster. Eventually, she drew up in front of a signpost which told her that she was entering Doohoma. She stared down the single-track road towards the place where she had lived and her family had died. The place she knew would call her back, forever.

A travellers’ wagon, pulled by two piebalds, startled her as they cantered past. Sitting up on the front board was a woman with long grey hair and black teeth. As she passed Ruby, she spat out a plug of chewed tobacco that landed on the floor at Ruby’s feet. Laughing as she cracked the reins and sped by. On the back board sat two boys. One of them threw something at Ruby. It was a stone.

‘Oi, you eejits,’ she shouted, as she felt a sharp pain and then saw the blood dribbling down her leg. She felt tears prickling at the back of her eyes. This was not how she had imagined returning to Doohoma to be.

Taking her handkerchief from her pocket, she spat on it and began dabbing to stem the flow from her shin. This gave her a chance to pull her thoughts together. She knew where the house was and how to get there.

This is it Ruby, she said to herself, you are back home girl. 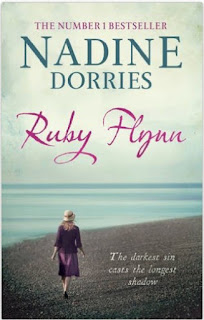 Synopsis
The FitzDeanes are wealthy. They have Ballyford Castle in Ireland and a growing shipping business in Liverpool. But Lady FitzDeane is unable to provide an heir. All of her five boys have died in infancy. There are whispers that the family is cursed - punished for a terrible mistake long buried in the past.
When young Ruby Flynn, an orphan reared and educated by nuns, arrives at Ballyford to work as a nursery maid, she cannot shake the feeling that she has been there before. But when?
Soon rumours and strong emotions are swirling around the beautiful girl with red hair, green eyes - and a mysterious past. Who is she really? And what will her arrival mean for this powerful family, riven by tragedy?

Keep up to date with Nadine Dorries' news

Nadine's website (http://nadinedorries.co.uk) is launching early next year with a six-weekly magazine. But you can already sign up for free.
Posted by Victoria Goldman at 07:48