AUTHOR IN THE SPOTLIGHT - Anna Mazzola - The Unseeing Blog Tour

I am delighted that ANNA MAZZOLA is my Author in the Spotlight today for her Blog Tour. The Unseeing is being published by Tinder Press on 14 July 2016. 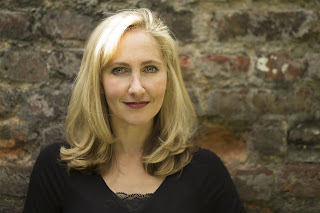 What inspired you to write The Unseeing, a crime novel set in the 19th century?
I first heard about James Greenacre and the murder of Hannah Brown in the Suspicions of Mr Whicher. The crime is mentioned only briefly, but seized my attention as it took place in Camberwell, not far from where I live. However, when I read the Old Bailey transcript, I realized this was Sarah Gale’s story. She was accused of helping Greenacre to conceal the horrific murder of another woman and yet she said virtually nothing throughout the entire trial. Given she was facing the death sentence, I thought that was very strange. What was really going on?

How easy has it been to research Victorian London and make your book as authentic as possible?
The research was the easy (and fun) part. The difficult bit was knowing when to stop. I spent over a year researching Sarah Gale, the Edgware Road murder, London in the 19th century, the status of women, criminal justice, prisons, Victorian foods, education in the Regency era. Really, I should have just written the darned book and then filled in the gaps, which is what I’m doing with my second: broad research, first draft, more detailed research. It helps, of course, that I have a deadline.

The Unseeing is based on the case of Sarah Gale, who was sentenced to hang for her role in the murder of another young woman. How close to ‘real life’ are the details in The Unseeing and how much ‘creative licence’ have you used?
As I say in the historical note to the book, I’ve used lots of real details from the case and all of the newspaper clippings that appear within The Unseeing are genuine. However, I ended up having to diverge from the case in some key respects in order to produce a narrative that anyone other than a legal historian would actually want to read. I found that hard. I’m used to working with real cases where facts are all-important, so it was difficult for me to accept that I had to let go of factual accuracy in order to achieve a different kind of narrative truth.  It’s part of the reason that one of the key themes of The Unseeing is truth and deception.

How has your background as criminal justice solicitor influenced your fiction writing?
I suppose it was because of my interest in justice and, in particular, justice for women, that I became fascinated by this particular story, and why it plays out as it does. I’m interested in how the criminal justice system treats vulnerable people and victims of crime, and how a criminal charge affects people’s lives, whether they’re acquitted or convicted, so those aspects feature in The Unseeing. However, I can’t say that my legal knowledge was directly relevant to the book. Whatever we think of the British justice system, we’ve come a long way from the early Victorian era!

Your next book, which you’re working on at present, is also set in the 19th century. What can you tell me about this book? And would you consider writing a book set in the modern day?
Yes, I’m currently writing my second historical crime novel, which is set on the Isle of Skye in 1857. It’s about a young woman who goes to work for a collector of folklore and discovers that a young girl has gone missing, supposedly taken by spirits, although of course that’s not what she believes. Again, the idea was sparked by a real case, but I haven’t tried to base it on the case in the same way that I did with The Unseeing.
I’d really like to write something set in the 1930s or 40s next. And yes, I would certainly consider writing a book set in the modern era (indeed, I had an idea for a one a while ago) but I’m sticking with historical fiction for a while yet. Quite keen to escape modern Britain at the moment.

Looking back to your teenage years, what advice would you give your younger self?
Go to lectures instead of the bar. Worry about money later and go travelling. I wish I’d seen more of the world before I started my career.

If you were writing a book about your own life, what would the title be?
At the moment? ‘101 Blog Pieces’. Or perhaps ‘In Search of Lost Time’.

What advice do you have for aspiring authors?
Don’t wait for the right conditions or the right time. There will never be the right time and there will always be things to do that seem more pressing than writing. Write now, whenever you can, even if it’s only for twenty minutes a day on your commute or during your lunch hour. It will be more than a lot of people manage and it’s the only way you’ll get anywhere.

And lastly, why should people read The Unseeing?
Because you told everyone it was great. And other people seem to like it too. That’s far better than me plugging my own book as I’m obviously extremely biased.

Thanks so much for having me on the blog!

About Anna Mazzola
Anna Mazzola is a writer of historical crime fiction. Her debut novel, The Unseeing, will be published on 14 July 2016 (February 2017 in the US).
The Unseeing is based on the life of a real woman called Sarah Gale who was convicted of aiding a murder in London in 1837. The novel has already won several competitions and Anna came runner up in the 2014 Grazia First Chapter competition judged by Sarah Waters.
Anna has also written and published several short stories. She is currently working on a second historical crime novel about a collector of folklore and fairy tales on the Isle of Skye in 1857.
Anna studied English at Pembroke College, Oxford, before becoming a criminal justice solicitor. She began writing after taking a creative writing course with Literary Kitchen and later attended the Novel Studio at City University.
She lives in Camberwell, South London, with two small children, two cats, one husband and a lot of books. 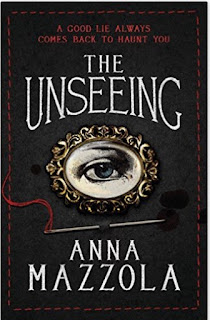 Set in London in 1837, Anna Mazzola's THE UNSEEING is the story of Sarah Gale, a seamstress and mother, sentenced to hang for her role in the murder of Hannah Brown on the eve of her wedding. Perfect for any reader of Sarah Waters or Antonia Hodgson.

After Sarah petitions for mercy, Edmund Fleetwood is appointed to investigate and consider whether justice has been done. Idealistic, but struggling with his own demons, Edmund is determined to seek out the truth. Yet Sarah refuses to help him, neither lying nor adding anything to the evidence gathered in court. Edmund knows she's hiding something, but needs to discover just why she's maintaining her silence. For how can it be that someone would willingly go to their own death? 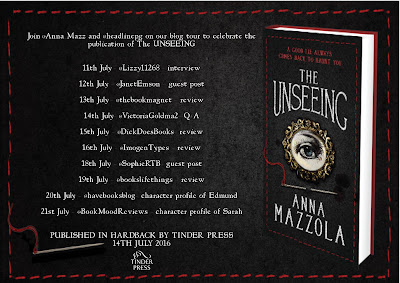 Posted by Victoria Goldman at 07:35