for her Close to Home blog tour 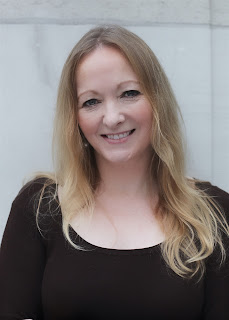 ... AUTHORS
To paraphrase Frank Sinatra, this is a case of ‘too many to mention’, but let’s give it a go. Greats like Ruth Rendell and Ian Rankin (of course). Lisa Jewell and Alex Marwood are more recent favourites, and I’m expecting great things from Emily Koch based on her fantastic debut If I Die Before I Wake.

... FILMS/MOVIES
I love the 1998 film A Perfect Murder, starring Michael Douglas, Gwyneth Paltrow and Viggo Mortensen. A stylish and elegant reworking of the equally impressive Dial M for Murder. And alongside that the absolutely outstanding The Long Good Friday, one of my all-time favourite films in any genre, with perhaps the most gruesomely realistic murder scene I’ve ever seen on screen.

... TV DRAMAS
Another embarrassment of riches. Old favourites like Waking the Dead, Law & Order, and Between the Lines (anyone else remember that?), and some outstanding new kids on the block – Line of Duty, True Detective I, Mindhunter, Motive, Broadchurch, Hinterland….

... FICTIONAL KILLERS
If you force me to choose it would be Tom Ripley, from the Patricia Highsmith novels, brought superbly to life by Matt Damon. Cold, clever, and psychologically complex *shivers*.

... FICTIONAL DETECTIVES
Can I have Inspector Morse?  Though I confess I do rather prefer him on screen to on page! For someone writing crime fiction set in Oxford I can hardly avoid bumping into him at every turn. But hey, that’s a high-class problem to have.

... MURDER WEAPONS
Has to be from that marvellous Roald Dahl Tale of the Unexpected, where the woman bludgeons her husband with a frozen leg of lamb then cooks it for the policemen who turn up to investigate. Hilarious!

... DEATH SCENES
I’m going to be a bit contrary here and go for the murder scene that turned out not to be one at all – the ‘death’ Amy Dunne counterfeits to incriminate her husband in Gone Girl. Such a clever idea – one of those you wish you’d thought of yourself.

... BLOGS/WEBSITES
I love Dead Good and Crime Time as a way to keep up with what’s going on in the crime world.  There are also some fantastic sites out there on subjects like forensic pathology. Not for the fainthearted but invaluable to help you get your facts right.

... WRITING TIPS
I’m someone who writes really detailed synopses before I start. I think that with crime in particular, it’s almost impossible to do it any other way. You have to know who did it and why, and ensure there are enough other possible explanations that the reader doesn’t get to the answer too quickly. So my practical tip would be to plan, plan, and plan again. The other is more of an ‘emotional’ tip, and that’s to grow as thick a skin as you can. This business is always a rollercoaster and there will inevitably be lows as well as highs, so toughen up, but don’t give up!

... WRITING SNACKS
I am very partial to fruit toast. And chocolate. Always chocolate…

About CARA HUNTER
Cara Hunter is a writer who lives in Oxford, in a street not unlike those featured in her series of crime books. Close to Home is her debut featuring DI Adam Fawley, and her second, In the Dark, will be published in July.

About CLOSE TO HOME 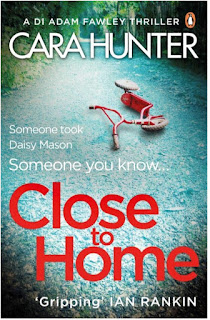 Publisher's description
HOW CAN A CHILD VANISH WITHOUT A TRACE?
Last night, 8-year-old Daisy Mason disappeared from a summer party at her home. No one at the party noticed her leave. Even her parents aren't sure of the last time they saw her.
DI Adam Fawley is trying to keep an open mind. But he knows that in nine cases out of ten, it's someone close to the victim.
When a pair of bloody tights is discovered, Fawley's worst suspicions are concerned.
Someone knows where Daisy is. And her time is running out.

Close to Home is being published by Penguin on 11 January 2018. 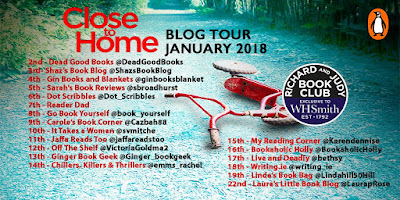 Posted by Victoria Goldman at 09:48