BEST OF CRIME with Matt Wesolowski

for his Hydra blog tour 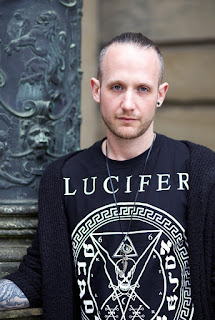 ... AUTHORS
Benjamin Myers; his style is rustic and visceral rural noir. Writing that you can lose yourself  in. What's more is that it's set in the north. Highly recommended.

... FILMS/MOVIES
I've still never seen a crime themed film that was better cast, acted and written than Se7en. It still holds sway over anything else today.

... TV DRAMAS
The Kingdom, an obscure supernatural crime/supernatural drama by Lars Von Trier. It's like ER with ghosts.

... FICTIONAL KILLERS
I have to say I enjoy the work of the possessed artist, Clayton,  in Lauren Beukes' magnificent Broken Monsters.

... FICTIONAL DETECTIVES
Whilst I'm fairly indifferent to the forces of good; Thomas Enger's Henning Juul is a character I find I can get behind. Faultlessly  portrayed.

... MURDER WEAPONS
I think it's a case of not 'what' but 'how'...Guns are pretty boring though.  How about a scythe? You don't get a lot of scythes in crime writing...

... DEATH SCENES
Not to give away any spoilers but there's a wonderful image in Antti Tuomainen's The Man Who Died involving a beauty spot in rural Finland and a samurai sword. That scene still lingers in my mind...

... BLOGS/WEBSITES
If I'm lurking online, the place to find me is /nosleep on Reddit!

... WRITING TIPS
Never stop. Learn as much as you can, attend every workshop within your vicinity and read...read widely, read books that you think 'aren't your thing'.

About MATT WESOLOWSKI
Matt Wesolowski is an author from Newcastle-Upon-Tyne in the UK. He is an English tutor and leads Cuckoo Young Writers creative writing workshops for young people in association with New Writing North. Matt started his writing career in horror and his short horror fiction has been published in Ethereal Tales magazine, Midnight Movie Creature Feature anthology, 22 More Quick Shivers anthology and many more. His debut novella The Black Land, a horror set on the Northumberland coast, was published in. Matt was a winner of the Pitch Perfect competition at Bloody Scotland Crime Writing Festival in 2015. His debut thriller Six Stories was an Amazon bestseller in the USA, Canada, UK and Australia. 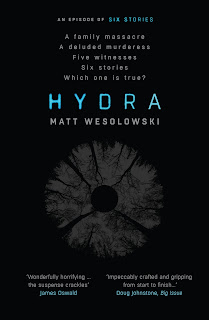 Publisher's description
One cold November night in 2014, in a small town in the north west of England, 26-year-old Arla Macleod bludgeoned her mother, father and younger sister to death with a hammer, in an unprovoked attack known as the 'Macleod Massacre'. Now incarcerated at a medium-security mental-health institution, Arla will speak to no one but Scott King, an investigative journalist, whose ‘Six Stories’ podcasts have become an internet sensation. King finds himself immersed in an increasingly complex case, interviewing five witnesses and Arla herself, as he questions whether Arla’s responsibility for the massacre was a diminished as her legal team made out. As he unpicks the stories, he finds himself thrust into a world of deadly forbidden ‘games’, online trolls, and the mysterious Black-eyed Children, whose presence extends far beyond the delusions of a murderess...

Read a snippet of my review
'Hydra is yet another powerful novel from Matt Wesolwski, the second book in his Six Stories series. It reads like classic crime, but with a modern twist. I'm hoping there will be more.'

To read the rest of my review, click here.

Hydra was published by Orenda Books on 15 January 2018. 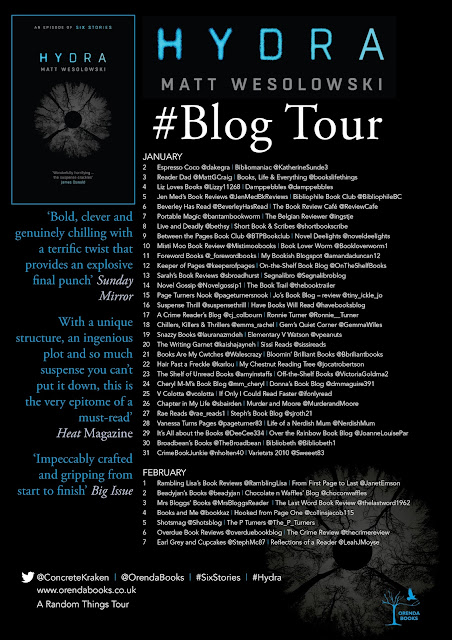 Posted by Victoria Goldman at 07:59