The Devil's Claw by Lara Dearman 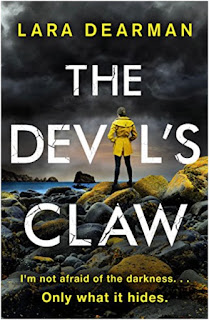 The six drowned girls stared up at them from the photographs. All young. All attractive. All dead. 'It is a lot of dead girls. And it's a very small island.'

AN ATMOSPHERIC NEW CRIME SERIES SET IN THE CHANNEL ISLANDS
Following a traumatic incident in London, Jennifer Dorey has returned to her childhood home in Guernsey, taking a job as a reporter at the local newspaper.
After the discovery of a drowned woman on a beach, she uncovers a pattern of similar deaths that have taken place over the past fifty years.
Together with DCI Michael Gilbert, an officer on the verge of retirement, they follow a dark trail of island myths and folklore to 'Fritz', the illegitimate son of a Nazi soldier. His work, painstakingly executed, has so far gone undetected.
But with his identity about to be uncovered, the killer now has Jennifer in his sights.

My verdict
The Devil's Claw is an atmospheric murder mystery in a claustrophobic Channels Islands setting.

I found this to be an intelligent read with plenty of history at its heart. The book is set in a close-knit town where strangers are noticed, yet murders have remained unsolved (and even covered up) for 50 years, considered to be 'drowning by suicide' instead. The narrative switches between journalist Jennifer, police officer Michael and the yet-to-be-revealed killer. Plenty of twists and turns kept me guessing right until the end.

I learnt a lot about Guernsey - not only in terms of its culture and history, but also about the people who live there. I even found myself Googling local legends and folklore to learn more. I have never visited the Channel Islands thought it's on my bucket list - and the author's stunning descriptive prose of the landscape and landmarks made me even more determined to make sure I get there one day.

I particularly love books with a journalist as the main protagonist, as long as they are portrayed realistically (journalists tend to get a lot of bad press). I found that Jennifer ticked all the boxes in terms of her inquisitive nature, inner strength and also vulnerability. Jennifer and Michael are both well-developed characters and I'm interested to see how they continue to develop in the next book.

The Devil's Claw not only entertained and intrigued me but also improved my knowledge of the world. An enjoyable debut.

Posted by Victoria Goldman at 07:33