The Confession by Jo Spain

The Confession
By Jo Spain
Published by Quercus (25 January 2018)
I received an Advance Reader Copy from the publisher. 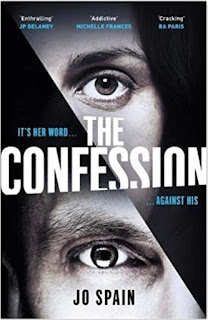 Late one night a man walks into the luxurious home of disgraced banker Harry McNamara and his wife Julie. The man launches an unspeakably brutal attack on Harry as a horror-struck Julie watches, frozen by fear.
Just an hour later the attacker, JP Carney, has handed himself in to the police. He confesses to beating Harry to death, but JP claims that the assault was not premeditated and that he didn't know the identity of his victim. With a man as notorious as Harry McNamara, the detectives cannot help wondering, was this really a random act of violence or is it linked to one of Harry's many sins: corruption, greed, betrayal?

My verdict
The Confession is a whydunnit rather than a whodunnit. We know from the start who beat Harry McNamara to death, as JP Carney has confessed to the crime, but this is very much the psychology behind the incident and a look into the lives of the people involved.

The book is well written and compelling with realistic characters and a chilling plot. The narrative switches between Harry's wife Julie, Alice (the detective investigating the crime) and JP. The description of the attack is vivid and violent, setting the scene for a gritty psychological thriller with plenty of depth. I was intrigued from the start and wasn't sure which way the book was going.

Secrets were clearly bubbling underneath the surface. I wondered if there were links between the main characters, though I had no idea how, what or why - or whether maybe I was just reading into everything too much, which is so easy to do with psychological thrillers. Then gradually the layers were unpicked one by one, like a game of Jenga, and the blocks came tumbling down, revealing the truth. My feelings for the characters changed as I delved into their lives - a sign of great writing, great characterisation and great plotting.

The Confession is a book of revenge and betrayal, family secrets and tragedy. It's filled with twists and turns. Surprising and intriguing - a book that was hard to put down. Highly recommended!

Posted by Victoria Goldman at 08:04