I am delighted that BETH MILLER is joining me on my blog today. Beth's latest book - The Good Neighbour - is being published by Ebury on 10 September 2015. 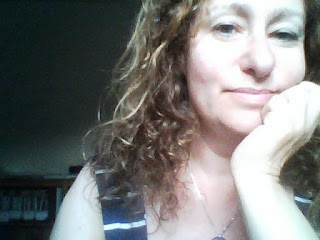 So Beth, what inspired you to write a book in the first place?
I always loved writing. When I was seven I told a teacher that I was going to be a poet when I grew up, which is odd because my poetry is terrible. My first book was written around the same time. It was the story of Mr Noop, a teacher with a very long nose.

Where do your ideas come from?
I am always inspired by ‘what if?’ My first novel – When We Were Sisters – was inspired by, what if my dad had left us when I was twelve (instead of what really happened, which was leaving when I was twenty-five!). The second novel, The Good Neighbour, was inspired by reading about a woman who was fundraising for charity because her child was ill, and thinking, what if she’s lying? (I’m afraid that my what if’s aren’t always very nice.) And the novel I’m working on now is, what if it was possible to lead a double life when you got bored with your first one…

Have your personal experiences influenced your writing? And if so, how?
As befits a first novel, mine was very influenced by my own experiences. For instance, like Miffy in the story, I did have a batmitzvah when I was thirteen (though she had a much nicer dress), and some of the characters in that book are amalgams of real people. I also lived in North Wales for a few years, which features in the story. But the second novel is much more fictional. I think the only autobiographical aspect is that both the main character and I are very short-sighted.

Describe your writing style in 10 words or less?
Plain prose which is vaguely amusing. Lots of dialogue.

Do you have any strange writing habits?
I wish I had something exotic to tell you, such as I can only write while wearing a silk dressing gown that belonged to Mae West; or I eat a grape every time I type a semi-colon (that’s another grape right there). But there’s nothing, really. The only apparently odd thing I do is keep everything in separate chapters, which I’ve been told is unusual (in fact the word the person used was ‘amateurish’! I love that people have opinions about this stuff).

Do you plot out the whole book before you start or just start writing and see where it leads you
My first book I just wrote, having no idea of the story or where I was heading. Or even that I needed to have a story, or know where I was heading. Writing time: approx. 12 years.
I plotted the second book in advance, possibly as a reaction to that 12 year thing. Writing time, 8 months.
So that’s one nil to plotting.
I plot loosely, and things do change on the way. But I do need some kind of plan to work with, otherwise it just takes me so long to finish.

What do you consider to be the hardest part of your writing?
First draft, without a doubt. It’s like pulling teeth. I love rewriting and will happily rewrite many times, but I’m not a fan of the blank page. I’m never happier than when I have a big bundle of pages to edit, and a pen in my hand to make the story better.

Do you read? If so, who are your favourite authors?
Who says no to the first part of this question?! My favourites, in alphabetical order, are: Douglas Adams, Jane Austen, Judy Blume, Laurie Colwin, Monica Dickens, Nora Ephron, Margaret Forster, William Goldman, Howard Jacobson, David Lodge, John O’Farrell, Anne Tyler, Molly Weir and PG Wodehouse.
I’m a member of a group of authors called ‘Prime Writers.’ The thing we have in common is that we all published our first books when we were over the age of forty. Anyway, I’m currently working my way through their books and have read some cracking ones amongst them. I don’t want to single anyone out, but if you’re looking for some great new books to try, you can see what we’ve written on our website (theprimewriters.com)

You are currently working on a non-fiction book, For the Love of The Archers: An Unofficial Companion, which is being published in October 2015. What prompted you to write this 'facts and trivia' book?
A writer friend of mine gave the publisher my name and they asked me to do it. It seemed to me to be a dream commission. I already blogged about The Archers for pauseliveaction; like most fans of the programme, I hate it almost as much as I love it, but hating it is part of the fun. Doing the book made a nice change from writing fiction. Of course some people will tell you that The Archers is also fictional, but they would be wrong.

If you were writing a book about your life, what would be the title?
The Completer-Finisher’s Handbook. Subtitled: Being Too Pig-Headed To Ever Throw In the Towel.

What advice do you have for aspiring writers?
Be too pig-headed to ever throw in the towel. Seriously, just keep on going with the writing. My secret belief is that I only got published out of sheer bloody-minded persistence. If you give up writing after a few rejections, you’ll never know the end of the story.  Just about every published writer’s story goes like this: ‘I wrote for years an got loads of rejections and kept going and then finally…’
I run a course for writers called ‘Dust Yourself Off’ which points out the huge number of famous writers who were multiply-rejected before success. Rejections are an essential part of the writing process, and you’re not nobody till you’ve got some.

And lastly, why should people read The Good Neighbour?
Ooh it’s a cracking good read. (My publisher told me to say that.) I think it’s an interesting story, about trust and friendship and betrayal. And it’s better plotted than the first one!

Beth Miller’s first novel, When We Were Sisters, was recently published by Ebury (Random). Her second novel, The Good Neighbour, will be published in September 2015. This autumn will also see the publication of her first non-fiction book, For The Love of The Archers, about the world’s greatest radio show. She is currently writing her third novel, provisionally entitled The Privacy Room.
She is a columnist for The Chap magazine, and the rest of the time she runs courses about writing, works with fellow writers as their book coach, and drinks tea while staring vacantly into space. She has been a sex educator, alcohol counsellor, and inept audio-typist. She has a PhD in psychology, which has yet to come in handy. 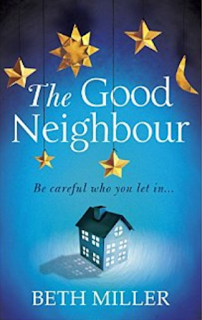 After living next to the neighbours from hell, Minette is overjoyed when Cath and her two children move in next door. Cath soon becomes her confidante, a kindred spirit, even her daughter’s babysitter.
But Cath keeps herself unusually guarded and is reluctant to speak of her past. And when Minette witnesses something unspeakable, she begins to question whether she really knows her new friend at all… 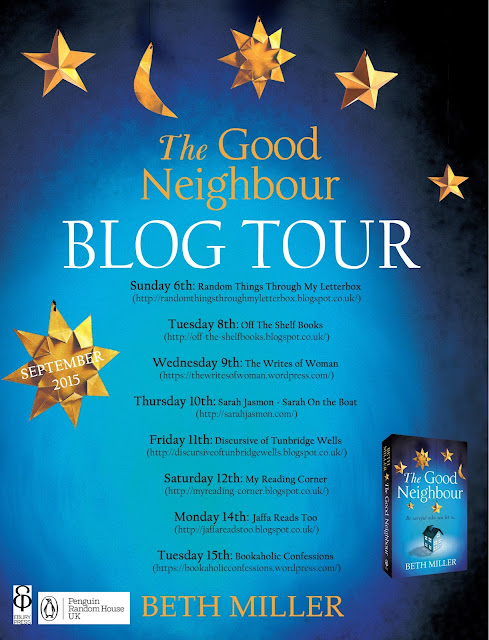 Posted by Victoria Goldman at 07:41