The Girl Who Broke The Rules by Marnie Riches 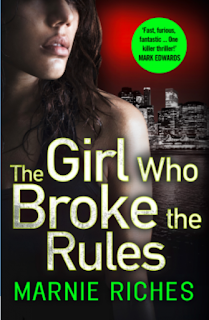 When the mutilated bodies of two sex-workers are found in Amsterdam, Chief Inspector van den Bergen must find a brutal murderer before the red-light-district erupts into panic.
Georgina McKenzie is conducting research into pornography among the UK’s most violent sex-offenders but once van den Bergen calls on her criminology expertise, she is only too happy to come running.


The rising death toll forces George and van den Bergen to navigate the labyrinthine worlds of Soho strip-club sleaze and trans-national human trafficking. And with the case growing ever more complicated, George must walk the halls of Broadmoor psychiatric hospital, seeking advice from the brilliant serial murderer, Dr. Silas Holm…

Yet again, the reader is transported between the dual locations of London and Amsterdam, following an investigation into a series of gruesome crimes. George is in London researching pornography among violent sex offenders for her PhD, but a disturbing case leads her to join Chief Inspector Paul van den Bergen in Amsterdam. Women are being brutally butchered, and certain evidence leads the police to suspect that this could be linked with human trafficking.

Both George and van den Bergen's personal lives are a mess. George's relationship with her boyfriend Ad is in jeopardy and van den Bergen is paranoid about his health. George is brash and hard as nails with plenty of attitude, a consequence of her difficult upbringing, and very different to sensitive van den Bergen (who is old enough to be her father). Yet not only are they friends and work colleagues, but it's clear that they are attracted to one another too.

The writing is fast-paced and highly readable with some graphic and gory descriptions. As the story progresses, the tension builds up and the body count rises. I had no idea about the identity of the murderer, and the culprit was a complete surprise.

The ending is also shocking and totally unexpected. Be warned that it will leave you hanging. It's left me desperate to read the third installment.

I received an Advance Reader Copy from NetGalley in exchange for an honest review.

Posted by Victoria Goldman at 08:29