BEST OF CRIME with Andrea Mara 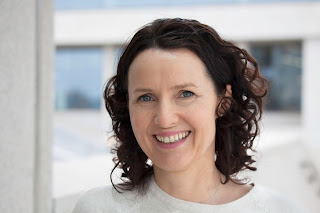 ... AUTHORS
Agatha Christie. I spent my early teens reading every single one of her books and wondering how she came up with the ideas. It’s years since I read them, but I can still picture the scenes – Ms Marple solving crimes in sleepy villages, Poirot and his little grey cells, and the genius ending in Murder on the Orient Express. Her books set me off on a lifelong love of crime - at least the fictional kind – and I can’t wait to introduce my own children to her stories.

... FILMS/MOVIES
The Usual Suspects is my favourite crime movie, because of the genius twist. Without giving anything away (is there anyone left who hasn’t seen it?) it’s the best ending I’ve ever seen, and the very definition of hiding in plain sight.

... TV DRAMAS
The Wire. It was my indoctrination to the world of box sets, just after my second baby was born. My husband and I watched one episode per night to make it last as long as possible, and spent months getting through the whole five series. For me, The Wire is a reminder that crime drama is always more entertaining when carried out by and to multi-faceted, intriguing characters, and plots are more interesting when they can’t be wrapped up and forgotten in a forty-two minute episode of Criminal Minds.

... FICTIONAL KILLERS
Frank Underwood in House of Cards. I don’t mean I approve of his methods, but it’s fascinating to watch. And because the occasional murder is just a means to an end for him, he doesn’t get his comeuppance and we get to continue watching his dastardly deeds.

... FICTIONAL DETECTIVES
Jackson Brodie in Kate Atkinson’s books. The tough-exterior-soft-inside detective isn’t a new idea but it’s done so well by Atkinson, it never drifts anywhere near cliché. Jackson’s voice is distinctive and consistent, and his decisions are utterly believable.

... MURDER WEAPONS
A leg of lamb in Roald Dahl’s short story Lamb to the Slaughter, which the murderer then roasted and fed to the investigating officers. I read that story as a teen and it has always stayed with me. (My husband is going to worry now, the next time I cook lamb.)

... DEATH SCENES
The most horrific and memorable death scene I’ve ever read was Simon’s in Lord of the Flies. It’s years and years since I read the book but it’s one that’s hard to shake. The horror and savagery of the out of control boys was so hard to imagine but at the same time, far too easy to imagine, and still is.

... BLOGS/WEBSITES
I mostly use good old Google for research, and stop every now and then to marvel at how easy it is. I’m working now on a book that’s partly set in New York, and in today’s chapter, a character meets her mother for lunch in the East Village. I was able to look up a Venezuelan restaurant, see photos of the inside, read the menu, and check it out on street maps to get a very real sense of what it’s like. Thank you Google.

... WRITING TIPS
The best tip I ever got was just start writing and see where you end up. If you take too long deciding what to write about and wondering whether or not to use Scrivener or plain old Word, you might never get started. Write anything that comes into your head and see where it takes you. Even half a page, to break the ice. You can always edit or delete what you’ve written afterwards, but if there’s nothing on the page in the first place, you can’t!

... WRITING SNACKS
I have so little time to write, I often don’t get as far as snacks - I write in the mornings while my kids are at school, which allows me precisely three hours and forty minutes. In that time, I have breakfast and lunch, so there’s (technically) no need for snacks. At night, I have blueberries and yogurts and cheese, and at the weekends, wine. Does wine count as a snack?

About ANDREA MARA
Andrea Mara is a freelance writer and blogger, who lives in Dublin with her husband and three young children. She writes lifestyle features for newspapers, magazines, and websites, and has won multiple awards for blogging. She attempts – often badly - to balance work, family and writing, then lets off steam on her blog, OfficeMum.ie. When she’s not keeping one eye on the kids, and the other on Twitter, she’s furiously scribbling notes for her next book.
Her current book, The Other Side of the Wall, is published by Poolbeg Press.

About THE OTHER SIDE OF THE WALL 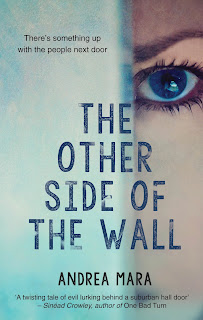 Publisher's description
When Sylvia looks out her bedroom window at night and sees a child face down in the pond next door, she races into her neighbour's garden. But the pond is empty, and no-one is answering the door.
Wondering if night feeds and sleep deprivation are getting to her, she hurriedly retreats. Besides, the fact that a local child has gone missing must be preying on her mind. Then, a week later, she hears the sound of a man crying through her bedroom wall.
The man living next door, Sam, has recently moved in. His wife and children are away for the summer and he joins them at weekends. Sylvia finds him friendly and helpful, yet she becomes increasingly uneasy about him.
Then Sylvia's little daughter wakes one night, screaming that there's a man in her room. This is followed by a series of bizarre disturbances in the house.


Sylvia's husband insists it's all in her mind, but she is certain it's not - there's something very wrong on the other side of the wall.

The Other Side of the Wall was published by Poolbeg Press on 16 May 2017.

Posted by Victoria Goldman at 08:03

Email ThisBlogThis!Share to TwitterShare to FacebookShare to Pinterest
Labels: Andrea Mara, author interview, Best of Crime, Crime fiction, Off-the-Shelf Books, Poolbeg Press, psychological thriller, The Other Side of the Wall