BEST OF CRIME with SD Sykes 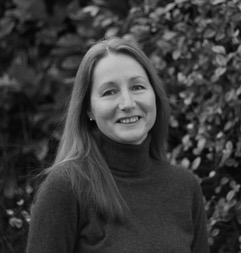 ... AUTHORS
It’s so difficult to pick one author, but I’m going to say CJ Sansom, as his Shardlake series introduced me to the pleasures of historical crime fiction, and the interplay between real historical figures such as Thomas Cromwell and Henry VIII and Sansom’s fascinating range of fictional characters.

... FILMS/MOVIES
A film that has stuck in mind, since I first saw it back in 1985 is Jagged Edge. What I loved about this film was the final turn – I really hadn’t seen it coming and I’ve never forgotten that feeling of complete shock and yet simultaneous understanding, as the plot fell horribly into place. I saw the film again recently, and to be honest, it hasn’t worn that well. My twenty-something son guessed the ending very early in the film, so perhaps audiences are more attuned to final twists now? But I remember, in my 1980s innocence, loving this film very much.

... TV DRAMAS
I finally caught up with The Bridge recently (the Swedish version). The first series is probably the best crime drama I have ever watched on TV. A plot line that brims with suspense and complex characterization, and a series climax that really delivers. This is epic writing. It’s original. It’s shocking and moving, and yes, at times it’s very funny.

... FICTIONAL KILLERS
This has to be Tom Ripley from The Talented Mr Ripley by Patricia Highsmith. Ripley is systematic, cold-blooded and without a conscience. He uses murder as a way of solving his problems, in a way that a normal person might write a letter of complaint or make an angry phone call. He never seems to regret his murders – his only concern is to elude detection. He is a dangerous, ruthless psychopath, but oddly we find ourselves almost rooting for him throughout the book, especially as his victims are portrayed as privileged and arrogant rich boys.

... FICTIONAL DETECTIVES
Saga Noren from the Bridge. She is so brave and uncompromising, and yet remains rather vulnerable. I particularly love her bluntness and her disregard for social niceties.  There is no filter when she speaks to others, and this can be both a great strength as she drives her investigations forward, but also a weakness, as she often alienates those in her team.

... MURDER WEAPONS
A book that I very much loved was The Lovely Bones by Alice Sebold.

As a girl, Susie is raped and murdered by a sinister loner who has lured her into his trap – a tent in a field. We don’t lose Susie at this point, as she remains the narrator of the book – as a ghost, or perhaps a spirit, following her murderer for years, until she discovers him about to attack another girl. Though unable to take physical form, Susie somehow dislodges a row of long icicles that knock this man off balance, causing him to fall into snowy ravine. He dies immediately and his body will not be discovered for months. It is very sweet revenge indeed.

... DEATH SCENES
A scene that sticks with me is from The Talented Mr Ripley. Following an argument, Ripley has bludgeoned Dickie to death in a rented row boat, and then has to dispose of both the body and the boat. He throws Dickie’s body into the sea, weighed down by an oar and then abandons the boat on a remote and rocky stretch of coastline. Ripley is panicked initially, but then coldly methodical in his actions, walking back through the town at night in his swimming trunks, as if this was the most normal thing in the world. He knows that drawing attention to himself at this point could be his downfall, so he holds his nerve with incredible resolution.

... BLOGS/WEBSITES
I’m going to admit to being a fan of Wikipedia. It’s a great place to start your research (though it absolutely should not be where your research ends!) I also love www.medievalists.com which publishes essays on such niche, but nevertheless fascinating, subjects as lapdogs in the fourteenth century through to the contribution of medieval physicians to the field of cardiovascular medicine. I also enjoy LitHub.com for topical and sometimes provocative discussion.

... WRITING TIPS
Write without fear – it is always better to get something down than to stare at a blank page. And keep moving forward, as premature editing can kill a novel. Then, when once you’ve written something that you’re happy with, try to put it away for a while before you look at it again. Now you will read your work with fresh eyes, as it will seem as if somebody else has written it – meaning that you can then edit dispassionately, without any attachments to your favourite bits. As they say, kill your darlings!

... WRITING SNACKS
Very strong coffee at 9am, and then Haribo sweets and tea. Lots of tea!

About SD SYKES
SD Sykes is the writer of the Oswald de Lacy historical crime fiction series. She is a graduate of Manchester University and has an MA in Writing from Sheffield Hallam. She lives in Kent with her husband and two dogs. Her latest novel, City of Masks, is the third book in the series, after Plague Land and The Butcher Bird.

About CITY OF MASKS 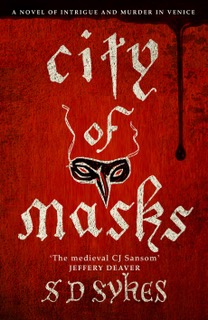 Publisher's description
1358. Oswald de Lacy, Lord Somershill, is in Venice, awaiting a pilgrim galley to the Holy Land. While the city is under siege from the Hungarians, Oswald lodges with an English merchant, and soon comes under the dangerous spell of the decadent and dazzling island state that sits on the hinge of Europe, where East meets West.
Oswald is trying to flee the chilling shadow of something in his past, but when he finds a dead man on the night of the carnival, he is dragged into a murder investigation that takes him deep into the intrigues of this mysterious, paranoid city.
Coming up against the feared Signori di Notte, the secret police, Oswald learns that he is not the only one with something to hide. Everybody is watching somebody else, and nobody in Venice is what he or she seems. The masks are not just for the carnival.

Posted by Victoria Goldman at 08:18