I'm delighted to welcome Matt Blakstad to my blog today for his Lucky Ghost blog tour, to talk about 'racing against reality'. Lucky Ghosts was published by Hodder & Stoughton on 27 July 2017.

Racing Against Reality
By Matthew Blakstad 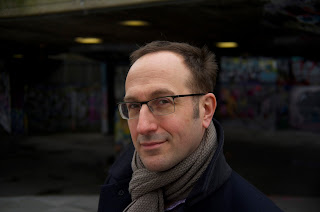 Remember when we still thought 2016 was a gruelling year? From the death of David Bowie to the pundit-defying outcome of the US presidential election, those twelve turbulent months left many of us begging for 2017 to begin. I guess we should have been careful what we wished for.

For my part, I spent last year writing my second full-length novel, Lucky Ghost. I started it on the 2nd of January 2016. (On the 1st I confess I was in no fit state.) By the time I finished the edit, Trump was president. Like my debut novel, Sockpuppet, my second book is set in the near future. It imagines a world very much like our own, only more so. A world where people go about wearing digital veils known as Mesh, which coat their worlds in comforting virtual illusions. They call this augmented reality The Strange.

Here’s the thing about writing a story set in the near future: you need to keep your eyes closely trained on the present. As we all know, it takes months – or even years – for a finished novel to make it into bookshops, by which time the world can have shifted in fundamental ways. Leaving the author’s bleeding-edge vision of the future looking as hackneyed as a 1970’s space opera. The risk is low for authors lucky enough to live in stable times. Right now, though, world events are moving faster than an Eastenders storyline – and they’re quite a bit less plausible. In times like these, the writer can end up in a race against reality.

As I wrote Lucky Ghost, real-world events began to accelerate ever faster, forcing me into constant revisions. I became a bit like Gromit, frantically constructing a toy railway line, split seconds before his train runs over it. In June, for instance, when the EU referendum result came in, I realised that the future I was writing about needed to be one where Brexit had already happened. Ideas about separation – both inside our society, and between Britain and the wider world – began to write themselves into my story. The Syrian crisis, which was already displacing hundreds of thousands of people onto the European continent, threw out the backstory of one of my protagonists, a troubled young hacker with the online handle Thimblerig. Then came the US election campaign, and the vicious spate of online attacks that plagued it. Attacks that originated in Russia and other former soviet nations. Inside my story, these events helped shape the Belarusian extortion syndicate that wages a digital attack on Britain. Even 2016’s spate of celebrity deaths, and its impact on our national mood, found an analogue in the novel.

Yet in spite of all these conscious responses to an ever-bleaker supply of news, it was only in February of this year, as I read through the typeset page proofs of Lucky Ghost, that I spotted the most glaring mark that 2016 had left on my story. As I picked my way through the final typeset pages – a painstaking but immensely rewarding part of the publication process – I realised that the book’s central metaphor, of people who choose to live inside inside a comforting, illusory version of reality, was not some fanciful futuristic conceit. it was exactly what had been going on around me as I wrote.
In a time of carefully-targeted fake news, where everyone from Russian hackers to mainstream political campaigns are barraging us with their own preferred versions of reality; where we’re spending ever more of our time in digital cocoons that show us only the things we already believe to be true; where the divides in our culture have become so starkly drawn that two people’s view of the self-same event can be irreconcilably different – in this environment, what else could I have chosen to write about, but deadly digital illusions, and the willing consumers of alternative facts we all risk becoming?

Lucky Ghost is a conspiracy thriller for a time when a large part of the world’s population prefers conspiracy theories to facts. Maybe, in the end, my book has at last caught up with the world around it. Time will tell who’s first to cross the finish line.


Matthew Blakstad’s first career was as a professional child actor. From the age of ten, he had roles in TV dramas on the BBC and ITV, in films and at theatres including the Royal Court. After graduating from Oxford with a degree in Mathematics and Philosophy, he began a career in online communications, consulting for a range of clients from the BBC to major banks. Since 2008, he has been in public service, using his communication skills to help people understand and manage their money. 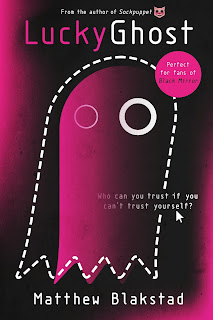 Publisher's description
Early one morning, blogger Alex Kubelick walks up to a total stranger and slaps him across the face. Hard.
He smiles.
They've both just earned Emoticoin, in a new, all-consuming game that trades real-life emotions for digital currency. Emoticoin is changing the face of the economy - but someone or something is controlling it for their own, dangerous ends.
As Alex picks apart the tangled threads that hold the virtual game together she finds herself on the run from very real enemies. It seems only one person has the answers she seeks. Someone who hides behind the name 'Lucky Ghost'.
But Lucky Ghost will only talk to a young hacker called Thimblerig - the online troll who's been harassing Alex for months.
Will Lucky Ghost lead Alex and Thimblerig to the answers they seek - or to their deaths? 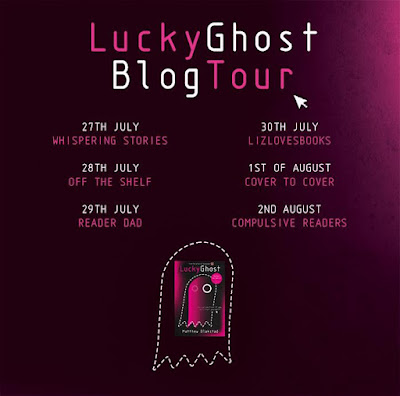 Posted by Victoria Goldman at 07:43